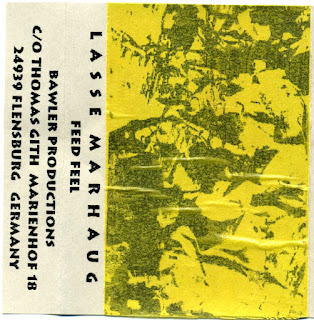 Lasse Marhaug (b. 1974) has since the early 1990s been one of the most active artists in the Norwegian noise/experimental music scene. As a performer and composer he has contributed to well over 300 CD, vinyl and cassette releases over the years, as well as extensive touring and performing live on all continents of the world. In addition to his solo work, Marhaug has collaborated with several artists in the fields of noise, experimental, improv, jazz, rock and extreme metal, as well as working with music and sound for theatre, dance, installations, film and video. He works with different kinds of instrumentation; from guitar-pedals and homemade electronics to computers and modified guitars, but conciders the mixing-board his main instrument. In the 90s he started TWR Tapes (still going) and ran Jazzassin Records. In the 2000s he started the record labels Pica Disk and Prisma Records. In 2011 he started his own print publishing called Marhaug Forlag. He has also been active as an organizer, promoter and producer. Marhaug was born in the northern regions above the arctic circle of Norway, but currently lives in Oslo.(from his official
webpage)
And here another tape which He shared with Gestorte, that I posted last year.
Bawler Productions was a small noise  and experimental label from Germany run by Thomas Gith.
All music created by Lasse Maraugh in April 1996. Front cover of cassette case is hand-painted/scratched.
~f*a^r~a^w*a^y~
click me