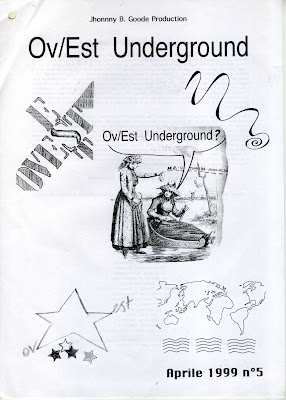 Number 5 of this incredible interesting fanzine, I have already posted the number 2 and number 6.


It was conceived to mix poetries and mail art, visual art and graphic works from the eastern and the western sides of the world. Publishing poetries translated into Russian/English and Italian, a very remarkable effort.

Also in this issue some great art-works, lots of poetries in various languages and some mail art.
Enjoy it.
*f^a_r)a*w~a:y
click me 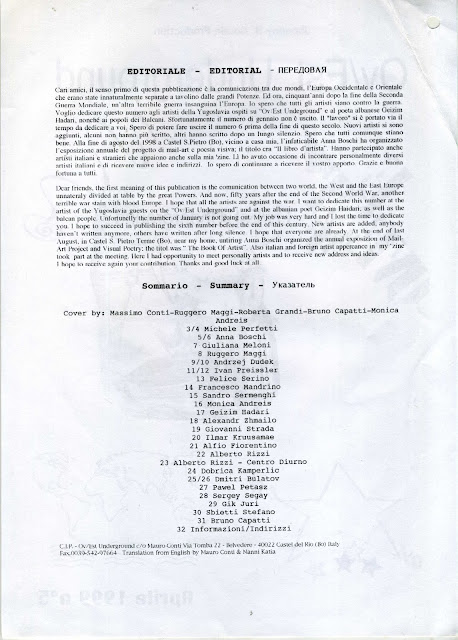 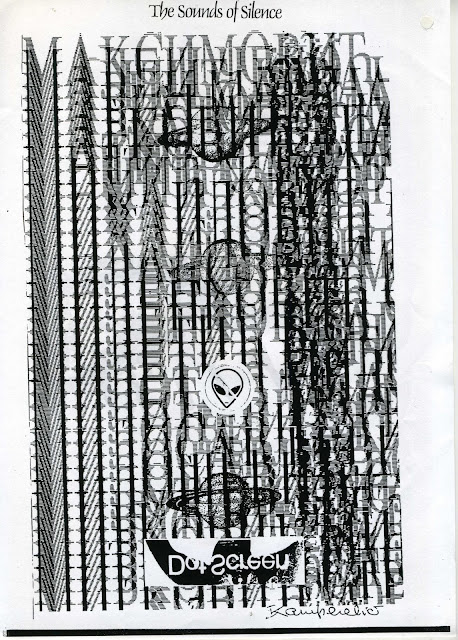 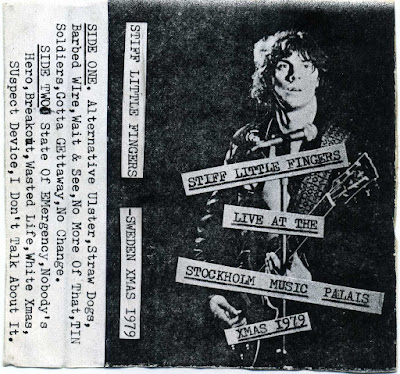 Stiff Little Fingers are a punk rock band from Belfast, Northern Ireland. They formed in 1977, at the height of the Troubles. They started out as a schoolboy band called Highway Star (named after the Deep Purple song), doing rock covers until they discovered punk. They split up after six years and four albums, although they reformed five years later, in 1987. Despite major personnel changes, they are still touring and recording. In 2014, the band released their tenth studio album and a world tour followed its release. Jake Burns, their lead singer, is the only member to have been with the band during all its incarnations, but in March 2006, original bass guitarist Ali McMordie rejoined them following the departure of The Jam bass player Bruce Foxton after fifteen years.(from a Wikipedia page about them)click me
Posted by faraway at 04:35 No comments: 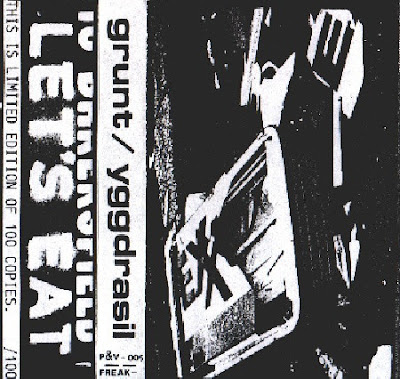 Both artists already covered in this blog.
For all the lovers of a certain kind of old school noise industrial.
This is a pure crystal gem.
Enjoy it.
:f(a:r(a:w^a:y>
click me 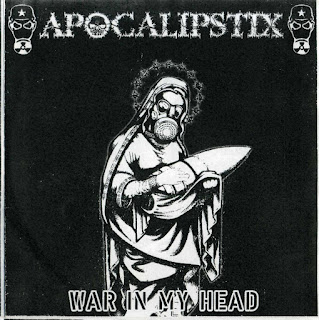 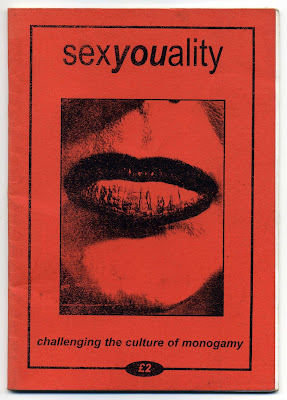 Very interesting pamphlet compiled and edited by Merrik and published by Godhaven Ink in 1999.

A very well done research about this subject.
Enjoy it.
:f)a*r^a)w*a~y(
click me 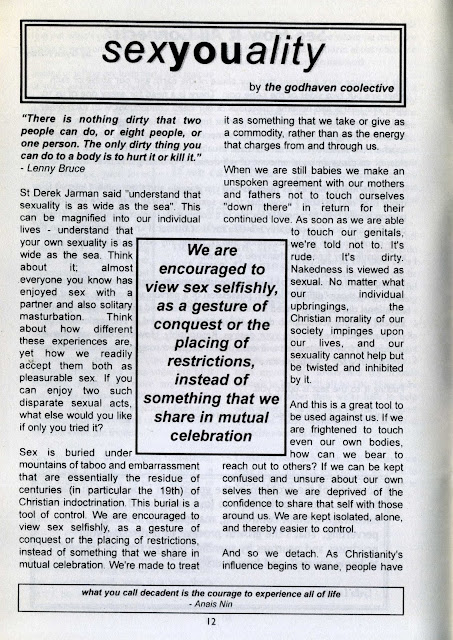 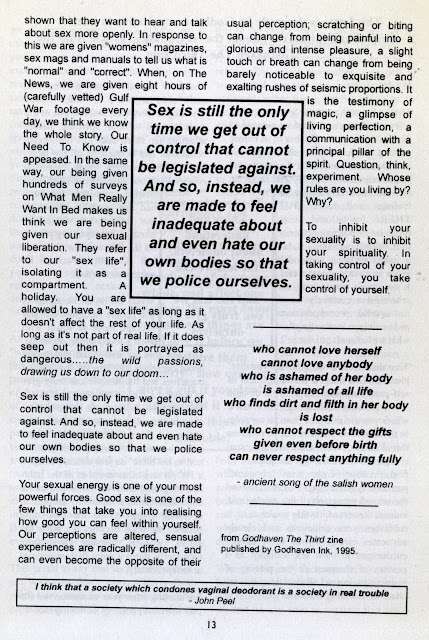 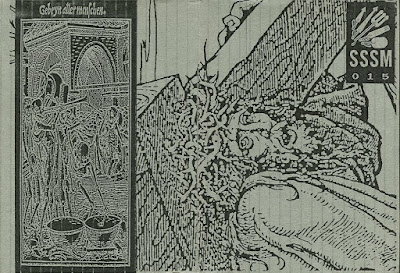 Astonishing double c60 tape compilation with an amazing selection of artists and tracks!

The music evolves in areas such as noise-ambient, power-electronics, industrial, drone and similar genres.
It came out with a variety of printed paper inserts housed in a plastic bag.

SSSM was a Japanese label releasing tapes and CDRs of experimental, abstract and noise artists, operated by Hiroshi Hashimoto.
It is still active and you can check its latest releases on its Bandcamp Page.
Enjoy it.
~f)a*r~a:w)a(y*
click me 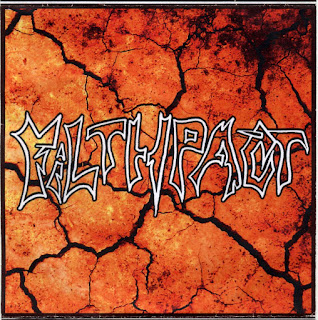 Demo on Cdr by this Scottish Sociopolitical Total Crust Violence band. Formed in 2004.

6 tracks of powerful crust punk, it came out with a 2 sided lyrics insert.
To complete this post I am attaching an interesting and well-done 10 minutes video documentary.
Enjoy it.
:f_a)r*a¬w:a}y
click me 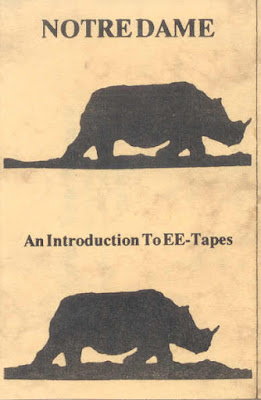 An Astonishing sampler compiled by Eriek Van Havere the mastermind behind the Belgian label EE Tapes and released on the German label Irre Tapes.

Both labels have been covered in this blog many times now.
This great compilation offers us a great selection of artists playing various forms of experimental electronic music.
Enjoy it.
:f(a~r*a~w)a_y:
click me 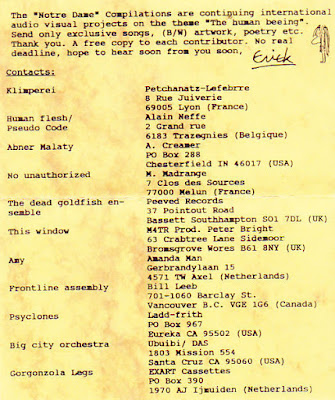 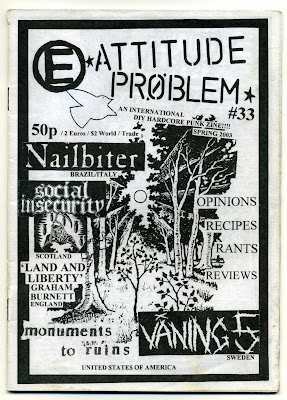 Number 33 of this punk zine, I have already posted the Number 29.
Also in this issue very good articles, interviews, zine and music reviews and much more.

Interviews to Nailbaiter, Vaning 5, Socal Insecurity, Monuments To Ruins.
It is all hand-written, very old school type yet good.

I am attaching the editorial for this issue, quite a few interesting ideas there.
Enjoy it.
:f*a~r{a_w*a~y)
click me 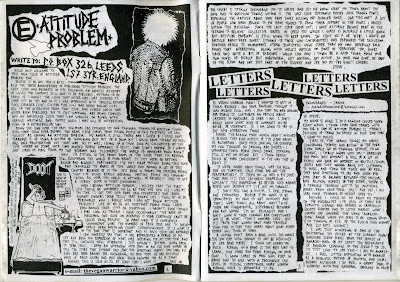 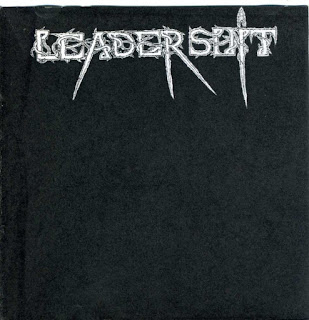 5 songs on this mini disc by this band from Barcelona. They play crust punk with a raw voice and many stops and go. All their discography on the blog Gritando Kaos.

This mini cd comes with a folded cover sleeve reporting lyrics and a nice drawing + address.
Enjoy it.
:f(a*r~a_w*a¬y:
click me 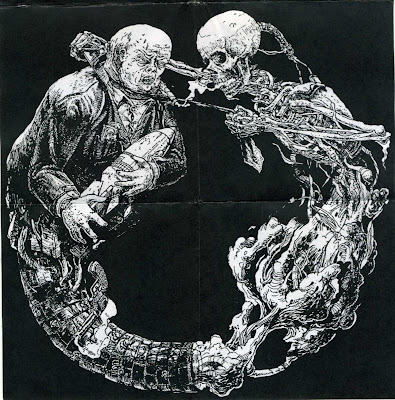 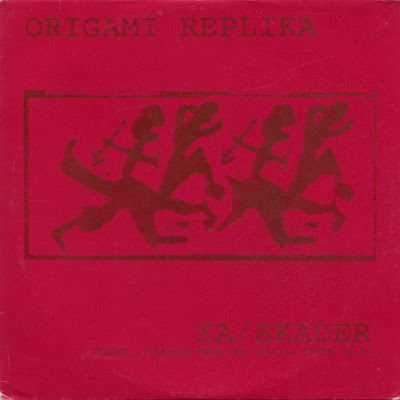 Origami Replika was started by Boe in 1992, the first release being an unplayable scratched 7" with a 23-minute cassette, and other tapes soon to follow. In -94 Boe presented the Origami Replika short movie "how to blow up anything in ten easy lessons" with live soundtrack by him with members of Red Harvest and Dunkelheit. In -95 Kjell Braaten and Boe did a gig, including a live remix of Swans' "Soundtracks for the blind" album before it was released. Boe continued to make a shitload of cassettes, including splits with several international activists on the noise scene.


In -96 Lasse Marhaug appeared for the first time and helped Boe master the best of the cassettes onto a cd entitled "Ka/skader". They continued to do a lot of records, cassettes and broken objects. The most known might be the CDs of Merzbow and Kapotte Muziek remixes. The whole thing culminated in two month-long tours in -97 and -98, effectively ending by Marhaug going to see Spice Girls, and Boe went to see Bob Dylan.


Origami Replika was then already taken over and ruined by Per Olav Jørgensen (aka Major Ego) and partly Judge Replika, stealing all their stuff and putting the SchMerzPønkDaDa suffix on everything the REAL replikans did. This issue has never been solved but generated a lot of confusing media attention, resulted in a cd that was published as a 7", an LP, several CDRs and tons of cassettes and compilation entries.


Marhaug quit, Boe, did one last job with Kai Kobi Mikalsen supporting Merzbow in -98 with a folk flute and cassette cover crushing ritual. The last of the old gigs starred Kim Xmazz who chopped headset cables and smashed a ghetto-blaster with an axe in a Madonna remix he did with Boe on national broadcasting. In addition to singing in his own band Nomad Nipples, Mr Xmazz did vocal performances with Lasse Marhaug Band and I quit ! in those days, and has later starred with Boe in various cameos, Boe made a lathe cut 7" and a cd as "The Nordic Miracle" with Marhaug.


The Origami Replika name was bought by John Hegre of Jazzkammer in 2000, thus they are not allowed to perform or publish anywhere in Norway the continent. Most important; they are back as a trio, with their performance "15 minutes of flame", based on ignorant cut-upping of old material, and new wonderful songs.


(When asked about a web page, Kim Xmazz commented: "Origami Replika can not breathe within the confines of the internet".)from their official webpage.
Jazzassin Records was started in 1996 and ended in 2002. Never intended as a "proper" label, but more as a playground for whatever sounds and in whatever packaging I desired to put out. Some of the releases remain available, although most in low quantities. There will be no repressings once sold out (unless someone wishes to reissue anything).
lassemarhaug.no
Major Ego Produkt was a label/production company obviously run by Major Ego A777 (real name Per Oscar Jørgensen) to secure 100% artistic and economic freedom within the framework of Origami Republika/KomKol Autoprod.
origami.teks.no
(Info from Discogs) click me

Selected and edited at the Church Street Studio 7th September 1996, and mastered at Lasse's place 8th September 1996
Comes in a cardboard sleeve with a CD sized, double sided promo sheet. On the back cover it is written "This plastic item has been produced to promote the original tapes"
Total time 72:30
Also released as a trashed edition limited to 28 copies as Dunkelprod Spaze XIII.
c) Origami Replika.
p) Jazzassin Records.
I.L.W.D.S. 1.867.
N©B 1996.
Non-profit tape reproduction encouraged. 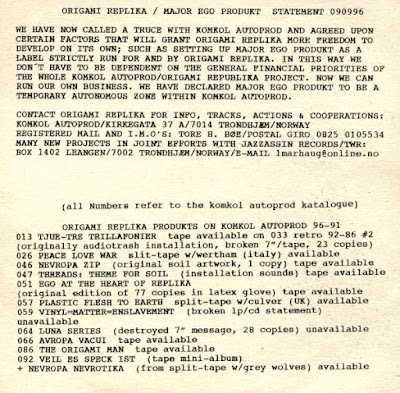 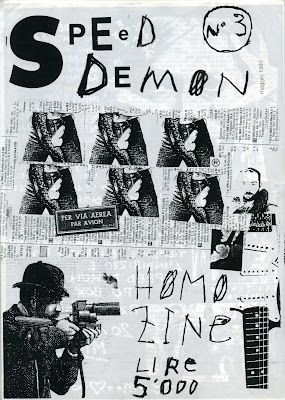 Number 3 of this underground homo zine, Speed Demon has been the very first Italian queer publication in the early 90s made by Flavio and Orlando in Torino.

In this issue interviews to Chainsaw Kittens, Der Tod, Mark I Chester(the photographer), Crazy Alice, Orlando of Quinto Braccio/Declino/Jester Beast, a report about Spew 2 a queer zine convention and a good selection of personal writings.
A great fanzine with lots of humour and interesting ideas.
In the Italian language, only.
Enjoy it, if you are Italian literate.
f:a(r~a_w~a*y~
click me 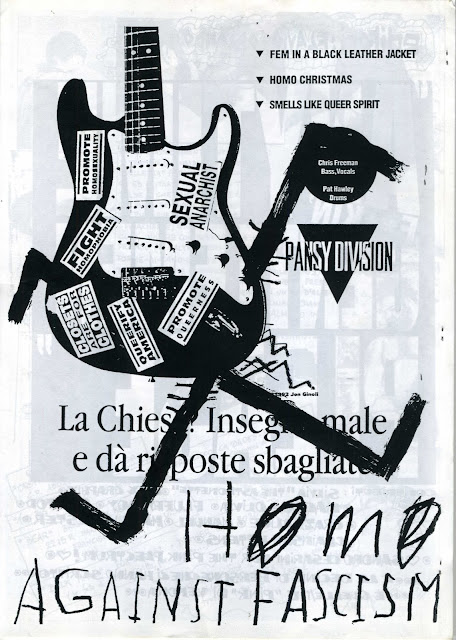 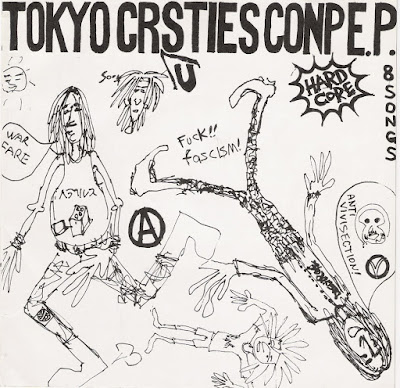 Compilation on a  7 inch with 4 Japanese bands playing crust punk as the title says.
The cover sleeve reports lyrics, graphic works and addresses of the bands.
D.I.Y Records is a Punk/grindcore label from Tokyo, Japan, releasing worldwide artists in limited 7" editions and on other media. D.I.Y Records is owned by Ryuji Asada of Battle Of Disarm.
It is still active and you can check their webpage here.
Crust As Fuck!
*f~a*r~a^w~a)y{
click me 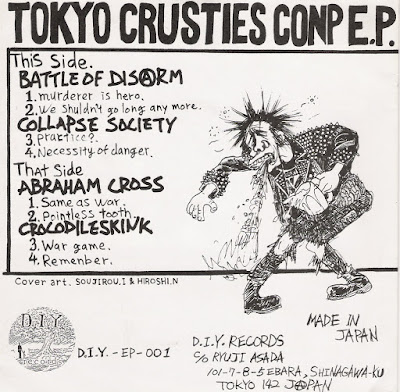