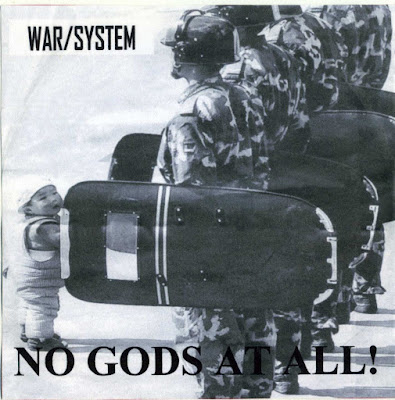 6 tracks of fast and grinding HC punk with political lyrics by this british combo active around 2007/2011, and I am not sure if they are still playing. A Discogs page about them is  here yet this CD-r is not listed there. 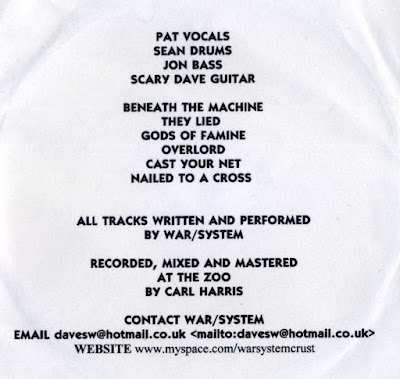 Labels: 200?, anarchopunk, cdr, crust punk, no gos at all, self released, uk, war/system 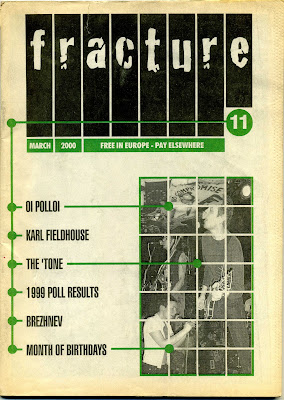 Fantastic free magazine made in Cardiff (Wales) in a print-run of over 5000 copies.I have, already, posted the number 4 released in October 1998. 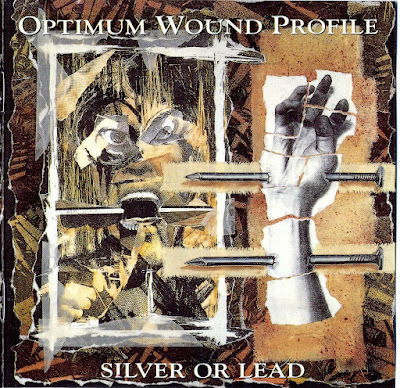 Optimum Wound Profile were an industrial metal band from Ipswich, England, active between the years 1991-1996. Combining elements of metal, crust punk, and sampling/programming technologies they released three albums and toured across Europe.

Formed in 1991 by guitarist Roki and vocalist Phil Vane, the pair quickly recruited Simon Finbow (vocals) and Ian Barnard (bass), followed by Dom Cattermole on drums. Picked up by an Ipswich promoter shortly after forming, the band entered the studio in the middle of 1991 to record two demos. On the strength of these OWP signed to Roadrunner Records at the end of the year.

Optimum Wound Profile's first album, Lowest Common Dominator, was released in the summer of 1992, and received positive reviews in Kerrang! and other music press. Featuring Niall Corr on drums, who had replaced the departed Dom Cattermole, the band's sound at this point was a hybrid of hardcore punk and industrial metal. A successful European tour, with Jason Whittaker of Whiteslug replacing Snapa Harvey, followed the release before the band returned to the UK to begin work on the follow-up.

Silver Or Lead was released in mid-1993 to much critical acclaim, and entered the UK Rock Chart at number 11, where it stayed for several weeks. This album saw the band's sound take a much more metal turn. By this stage all of the drums were programmed. The album was produced by Colin Richardson, who has worked with Slipknot, Machine Head and Bullet For My Valentine among a host of others. Another successful European tour followed, but Roadrunner Records declined the option of a third album.

In 1994, OWP signed to We Bite Records and in January 1995 released Asphyxia. Having parted company with Phil Vane, all vocals were provided by Simon Finbow. The album was the band's most critically acclaimed release to date.

Optimum Wound Profile spent two years after the release of Asphyxia writing a fourth album, 'Cult Of Saints 1425'. Only demo versions of these songs exist as the band decided to split up in 1996.

In 2007, Metal Mind Productions licensed the first two OWP albums from Roadrunner Records for re-release in August the same year.

Late in 2007 Optimum Wound Profile reformed with former members Simon, Roki and Jason being joined by Barnie Mills (bass) and Malcolm Peck (drums), to concentrate on the unreleased Cult Of Saints album. The band entered the recording studio for the first time in twelve years in spring 2008 to record demos. The project has since been put on hold. 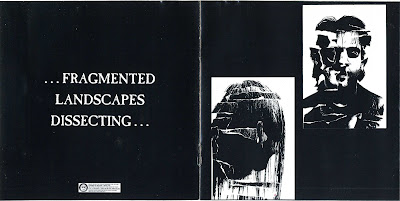 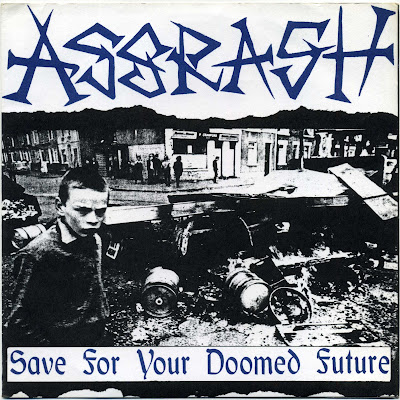 Legendary 7inch by the raw punk crusties Assrash, they started in the early 90’s in Minneapolis, Minnesota playing hard raw punk with songs about getting drunk, anger, and political anthems.It was relesed on the famous Profane Existence  DIY punk rock collective formed in 1989 and based in the United States by Dan Siskind and a number of others. They run Profane Existence Records which releases anarcho-punk style releases from bands throughout the world. They also release "Profane Existence" magazine as well as operating Profane Existence Distribution.

All the graphics included in the folder and I left these tunes as waves. 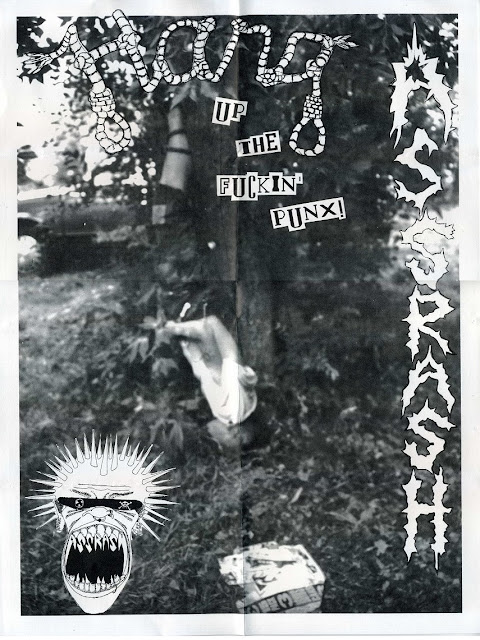 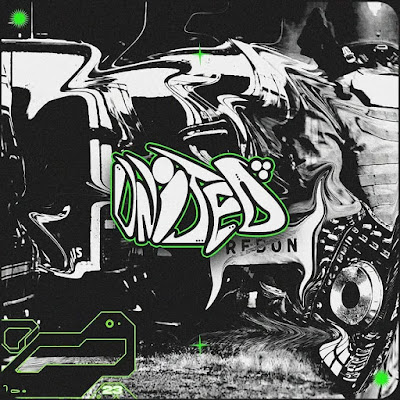 In June 2021 the French police attacked a rave party near Redon (Fr) with massive violence. They destroyed a lot of equipment and many people got injured and traumatized.
With this album we want to show our solidarity with all the victims of police brutality.
You can buy the digital album including 24 tracks on Bandcamp.
All the profit goes to the victims.
Thanks.
This is the compaliation made to support the sound system after the riot and violence managed by the french police during Redon free party, on 21st june 2020.
Such a violence is and will never be justified, and by bying this compilation you will help the sounds system to keep their independance, their freedom, and their motivation to make you dance. All tracks are made from different artists from differents countrys and have been gently given by them for this occasion.THANKS A LOT TO EVERYBODY INVOLVED IN THIS COMPILATION!!! Lets rave!!
Buy the album here: click me
Posted by faraway at 11:29 No comments: 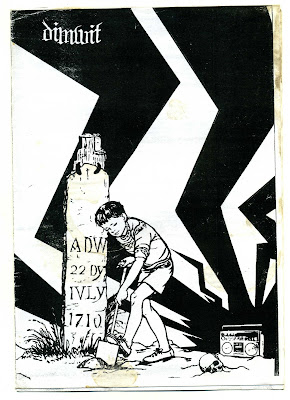 Short yet interesting fanzine made by Johan Rageot in France, this is the first issue in English language but He made 6 issues in French language before this one.

In its pages we`ll find  long and interesting interviews to Alcoholic Desaster from Greece and De Novissimis from Ireland + many fanzines reviews.

It is short but cool,Enjoy it. 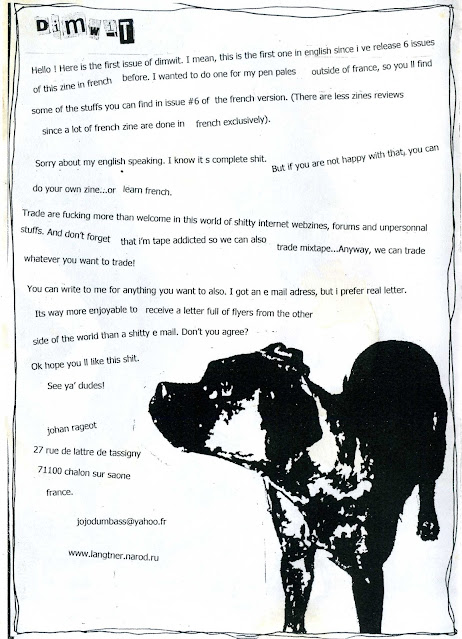 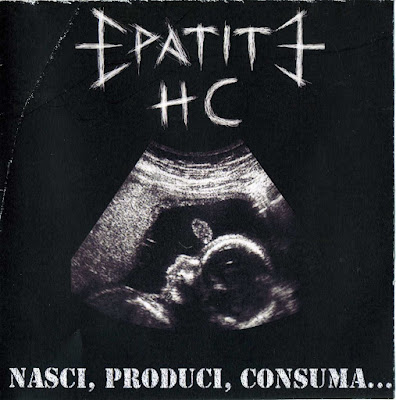 First Cd-r by this Italian combo, I have posted, already, their second Cd-r L`Incubo  released in 2011.

5 tracks of HC punk sometimes getting close to the OI Punk sounds,sung in Italian with political messages and personal lyrics,it will make happy the lovers of a certain old school punk. 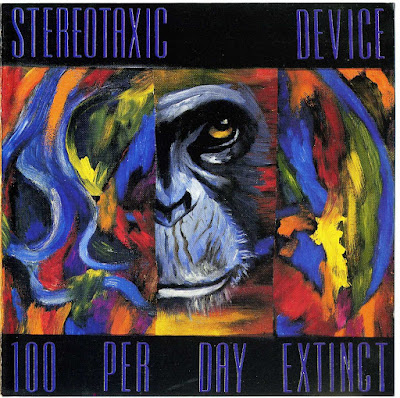 Stereotaxic Device was an American dark obscure electro band formed by George Sarah, Jennifer Williams and Rebecca Bing. After recording their first 4 song demo with guitarists Rae Dileo. Rebecca left the group to be replaced by Daniel Williams. Their self titled full length album was engineered by Biff Sanders and and featured guest guitarist Jeremy Daw on the single Lost Land.

KK Records was a Belgian label that started with EBM/Industrial in the 2nd half of the 80s. During the 90s the style changed into some more experimental pop-electro before it dissolved around 2000.(info from Discogs)  click me 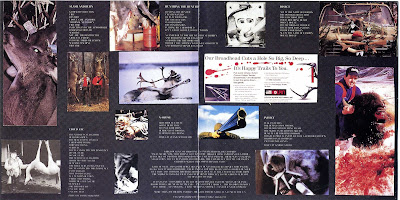 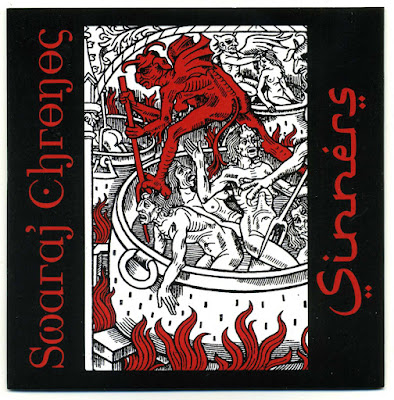 A new band from London (UK) mixing politcal statments and HC punk! 7 tracks of melodic HC punk with some noises and samples,female voice and lots of energy.The recording is pretty good and the music reminds me some stuff of old anarchopunk bands such as Life But How To Live It or Jingo De Lunch! 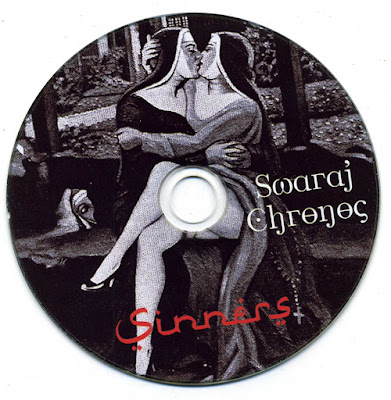 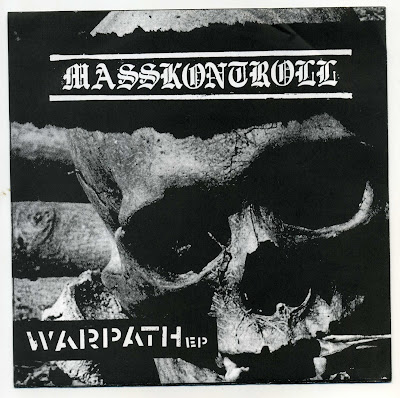 American crust punk band from Portland, Oregon. Formed in summer 1993, they released a handful of singles, one LP, and appeared on several compilations before disbanding after their European tour in November 1995.Enjoy it.
:f_a^r¬a>w:a~y  click me 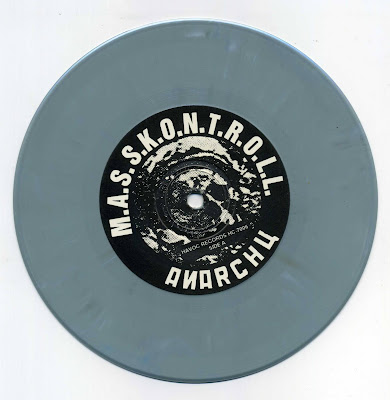 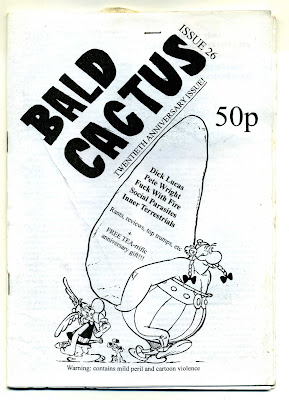 This issue celebrate 20 years of activities and contains interesting interviews to :Inner Terrestrials, Fuck With Fire, Social Parasites, Dick Lucas of  Subhumans/Culture Shock, Behind Enemy Lines, Pete Wright of Crass + tons of music and zine reviews and rants/political articles.It came out with a free teabag.

Andy started this zine in 1988! This is a good example of the underground press keeping the real spirit of the DIY scene very strong and healthy. Enjoy it. 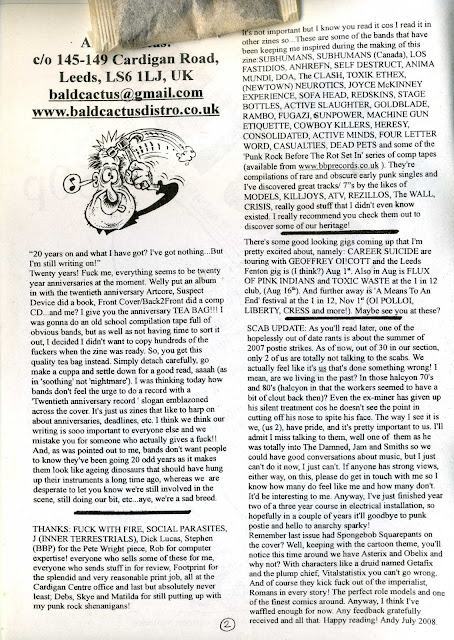 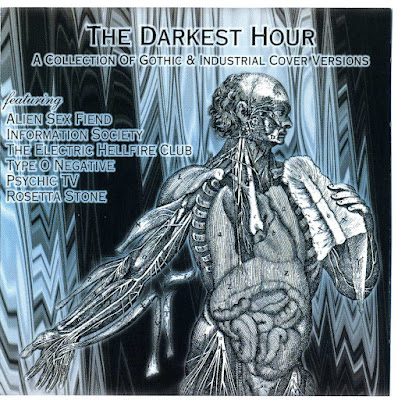 Cleopatra is a Los Angeles-based independent record label founded in 1992 by entrepreneur and music fan, Brian Perera.
Brian acquired his love for the music business by becoming an active participant in the Los Angeles club scene through the 1980/90's. The label was officially launched with three releases, Pressurehed (a space rock band from the SF bay area), followed by the release of Motörhead's "On Parole". The third release, was actually a series of reissues by electronic pioneers Kraftwerk.
They specialize in all genres, including A Capella, Acid, Adult, Aggro Rock, Ambient, Big Band, Blues, Breakbeat, Breaks, Chill, Drum & Bass, Electronica, Experimental, Gothic, Hardcore, Indie, Industrial, Krautrock, New Wave, Oi!, Punk, Reggae, Synthpop and Techno. click me (info from Discogs) 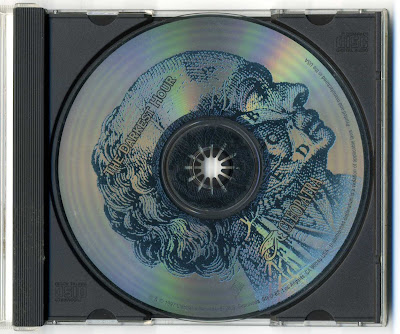 He started his music carreer in the 80's playing keyboards under the name of Tito Turbina Tastierista Futurista. 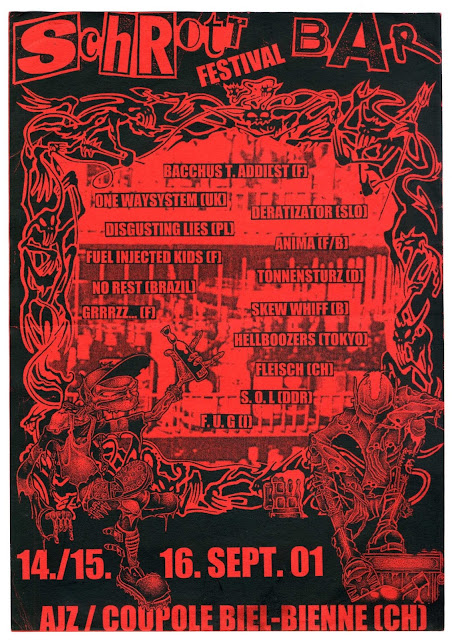 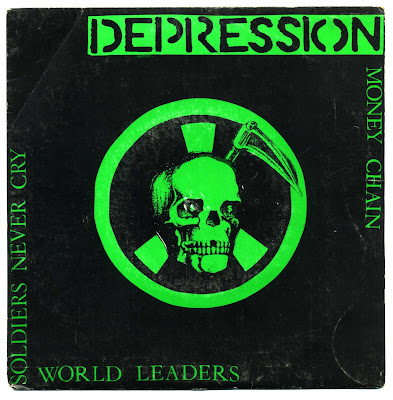 Depression formed some time in 1982 in Melbourne, Victoria, on the East coast of Australia. Smeer, who had been playing in the early Australian punk band The Desert Rats, met up with two locals called Liddy and Spike (no, not the girl from Degrassi). After only a short while, Depression started to play regular shows at "The John Barleycorn Hotel". After about a year of playing there, Depression began playing at "The Seaview Ballroom", a venue which became a mainstay of the Melbourne Punk/Hardcore scene. Around this time, the Dead Kennedys toured Australia, and talks between the band and Jello resulted in Depression being part of the legendary Welcome to 1984 compilation on Maximum Rock'n'Roll Records.

After being approached by Phil MacDougall of Reactor Records (Perdition, Vicious Circle, etc.), the band went into a studio and recorded three songs for $120. These songs, "Money Chain", "Soldiers Never Cry" and "World Leaders", became the Money Chain EP and the first record for Reactor Records.

In 1985, the band went into a "good" studio to record material for a full length. Hassles with printers and not obtaining the sound the band wanted resulted in a delayed release for Depression's self titled LP. Despite the delays, the record was one of the most important for the band and the Reactor Records label.

November 1985 saw the release of the band's next full length, Australia, Australia. Again on Reactor Records, this album received good reviews in the US and UK. Things were looking up for the Depression/Reactor partnership.

However, in 1986, Phil's reluctance to finance an overseas tour for the band ended the relationship and Depression and Reactor parted company. However in 1988, Depression appeared on the famous Not So Lucky Country double LP on Reactor Records. In the meantime, Depression headed in a more metallic direction, releasing the Ultra Hardcore, Mega Heavy, Punk, Metal, Thrash live album, the Thrash Till Death album and finally in 1989, the Hardcore History album which was made up of demos and early cuts.

In 1989, Depression called it a day after mixed reactions to their later work and differences within the band. Depression were one of the most successful Australian Punk/Hardcore acts from the era. (info from Discogs)   click me 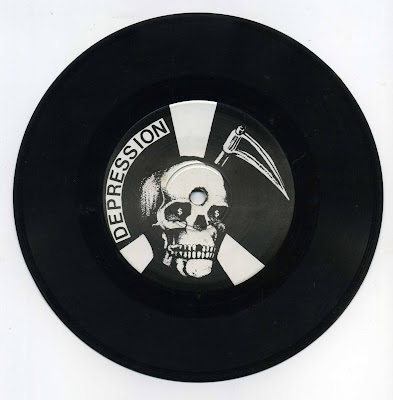 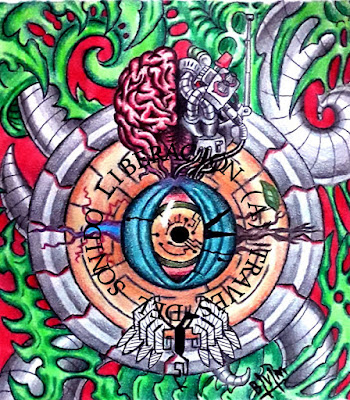 ¡No temas a ser libre! 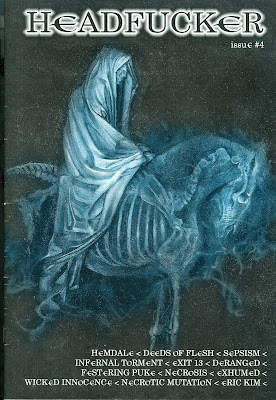 Magnificent fanzine made in Italy but all in English language, this issue strong with its 48 pages has an incredible section of music reviews + lots of long and interesting interviews(see table of contents),amazing graphics - drawings and pictures. It`s all about metal especially death metal...a great example of  astonishing underground press. 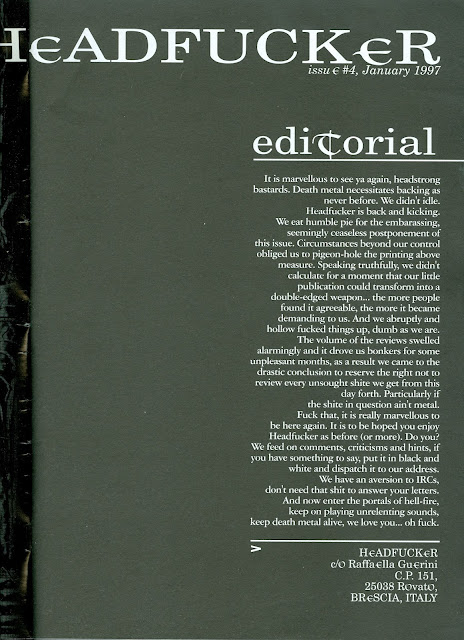 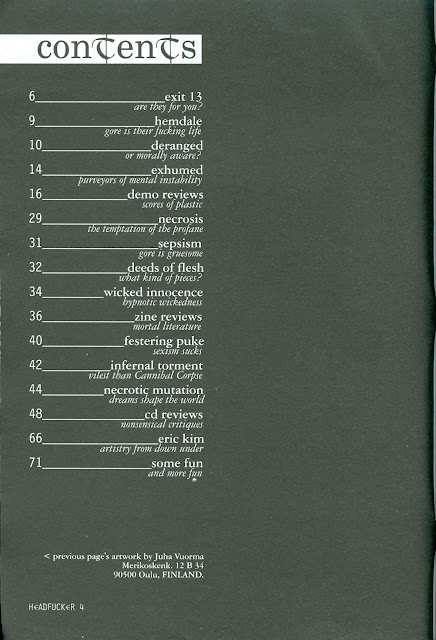