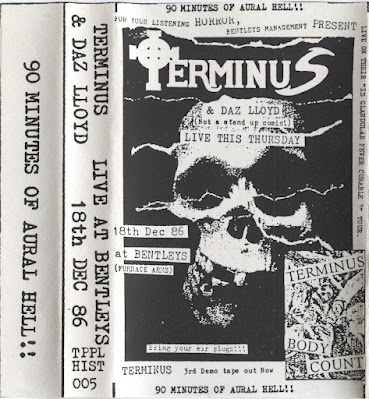 The followers of this blog should be familar with Terminus,a band born in 1983 and active till 2001.I have,in fact, posted many of their tapes. I have been in touch with Mark (the singer-guitarist) for a few years now and he kindly passed to me some rare stuff both by Terminus and by other old artists,one of them being the fantastic Daz Lloyd.

I just want remind you all to visit their excellent webpage where you can read about their history, discography, gigs, friends and much more.Funny enough this tape is not listed in their webpage.It is, yet, a great tool documenting the energy and the passion coming out from their live shows.

A big Thanks to Mark for passing to me this great tape. Enjoy it. 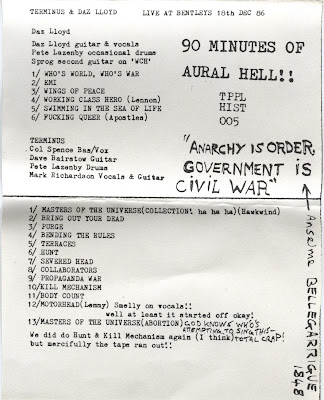 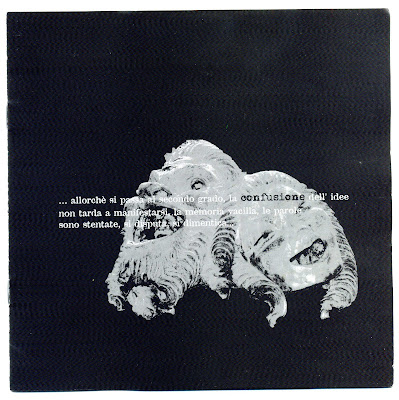 8 tracks of fast and furious HC Punk in this cool 7inch by the Torinesi Confusione! Nicely packed contains the lyrics translated into English, each of them with a rather original drawing. It is a fine production, effort of many DIY labels. Super cool... 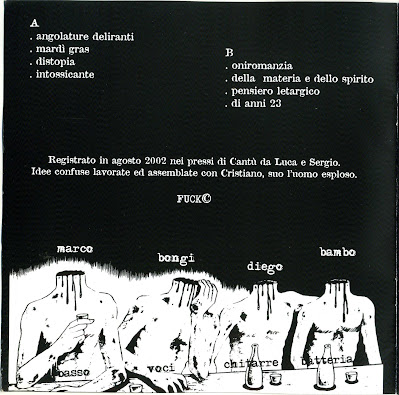 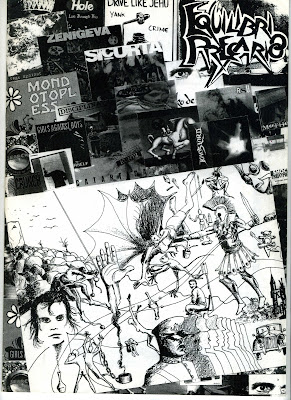 Very good magazine covering the Italian and International underground music scene!! In this very first issue lots of interesting interviews and tons of music reviews. Here I am attaching the table of contents.

A fantastic effort of the independent underground press. Enjoy it if you are Italian literate. 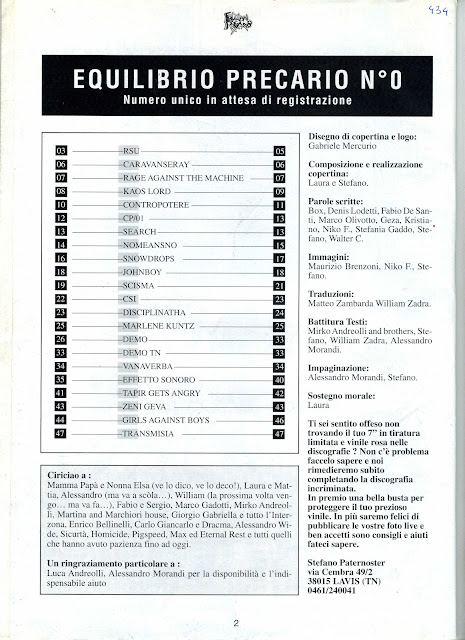 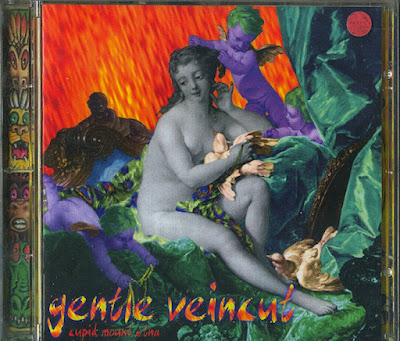 Formed in 1990, ‘Gentle Veincut’ has played a hundreds of live-shows all over Europe and has released a handful of records.The music is loud and can be described as NoiseRock/PostPunk with a slight NoWave influence. Some fanzines draw comparison to bands like ‘The Jesus Lizard’, ‘Shellac’ and ‘Sonic Youth’, but nevertheless it has its own style.  click me 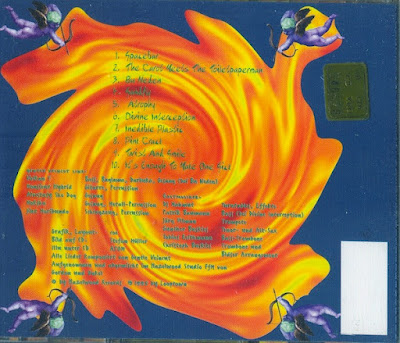 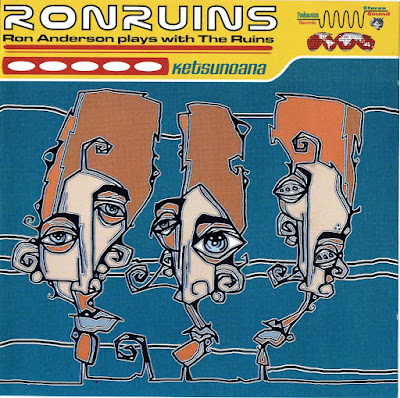 Super trio playing prog-tech experimental fast music with many times changes and incredible new dimensions mixing jazzcore with prog-rock passages.I have, already written about the fantastic band called Ruins when I posted their old tape The Best Of Ruins, and I have also written about their super skilled drummer Tatsuya Yoshida. In this cd they are jojned by Ron Anderson, a multi-instrumentalist intuitive music maker who plays traditional instruments like the electric guitar but also will use anything that can make a sound - including the recording studio. He has nearly 60 recordings released. He has his own Record Label "RA Sounds": ronanderson-molecules.com, Bandcamp 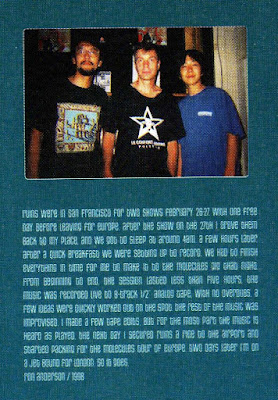 Since the early eighties, Yoshida had played and collaborated with many critically praised Japanese bands, such as Zeni Geva, High Rise (2), YBO², Musica Transonic, Vasilisk, Dissecting Table, various Acid Mothers Temple units, ZOA, and Aburadako. Nicknamed "devil from the East," Tatsuya Yoshida is an extremely prolific and technically skilled drummer, praised for his vicious raw energy and the ability to play superhumanly fast while keeping even the most complex rhythmic structures sharp and pristine.

The drummer has worked with the entire avant-garde 'hall of fame' of the last four decades, from Fred Frith and Derek Bailey to Keiji Haino and Otomo Yoshihide. John Zorn, who praised Tatsuya as an "undisputed master drummer of the Japanese underground," invited him to play in the seminal jazz/grindcore unit PainKiller (2) on several occasions after Mick Harris' departure, and had a huge impact on Yoshida's recognition overseas.

Tatsuya was a long-time collaborator of a controversial noise artist Juntaro Yamanouchi. He participated in one of The Gerogerigegege's very few documented early 'secret shows' (which were happening at fetish/S&M gay clubs), released on '91 Live Greatest Hits CD. In January of 1987 at a private Hanzōmon residence in Tokyo, Yoshida (equipped with vibrator, whip & enema) joined J.Y. on toy instruments to create a rather sparse accompaniment for Gero 36 who screamed and moaned in pleasure and pain while masturbating and self-pleasuring/torturing in every unimaginable way. According to the 'Live History (1986~1990)' list in the booklet, it was the Gerogerigegege's third-ever concert: just a couple months after Nov '86 'maiden voyage' at WASEDA University Auditorium and the same week the band played at Antiknock in Shinjuku. Tatsuya Yoshida also played drums and announced tracks on '94 thrash/1-2-3-4 noisecore Instruments Disorder (170 Songs CD)—perhaps the loudest and harshest Gerogerigegege's albums to date. Finally, Yoshida mastered several of the band's albums, including an hour-long minimal ambient/drone None Friendly '99 CD, and their last official release prior to 2001–16 hiatus, Saturdaynight Big Cock Salaryman CD EP.  official webpge: magaibutsu.com Pandemonium Records was a French noise-rock label from Marseille, launched in the 1990's by Philippe Petit. (all the info from Discogs)   click me 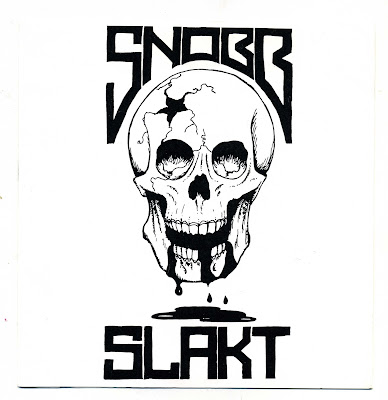 Snobb Slakt was an hardcore punk band from Helsingborg, Sweden,active in the early 80s.This 7inch was issued in a fold-out sleeve with lyrics and band-pics printed inside.Recorded May 6th 1984.Enjoy it. 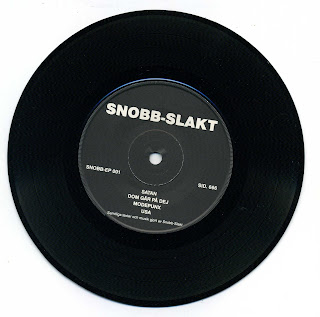 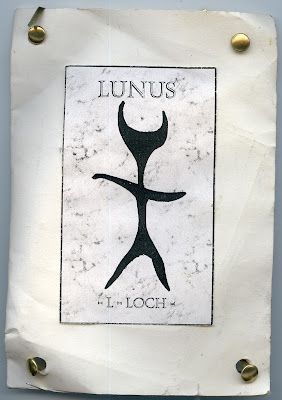 Old c60 cassette by this Italian project formed by artists already covered in this blog with a few amazing projects. In this tape, Lunus appears as a collaboration between Luigi Russolo , Stefano Barban and Devis G.! 3 long tracks on each side of excellent esoteric electronicks.

Soffitta Macabra is a label founded by Marco Deplano [aka Wertham] and focuses on artists of the dark ambient and industrial scene. Enjoy it. Masterpiece Full lenght Album by this amazing band from Japan,I have already, posted their 7ich 髑髏 [Skull] released in 2008 by the same label. Their unique style of heavy deranged HC Punk will make happy all the lovers of certain powerful music. Only 700 copies were printed back in 2010,it is ,very possibly, already hard to get.

HG Fact Inactive Japanese hardcore, punk and noise label. Operated by Tadashi Satoh. Their website used to be at http://www.interq.or.jp/japan/hgfact/ but is not online anymore, old versions can be found at https://archive.org/web/

To enrich this post I have included a video of a live show @Earthdome on 15 June 2014 in Tokyo. Big thanks to Gianluca for lending me this fantastic piece of vinyl,I left these tracks as waves. Enjoy it! 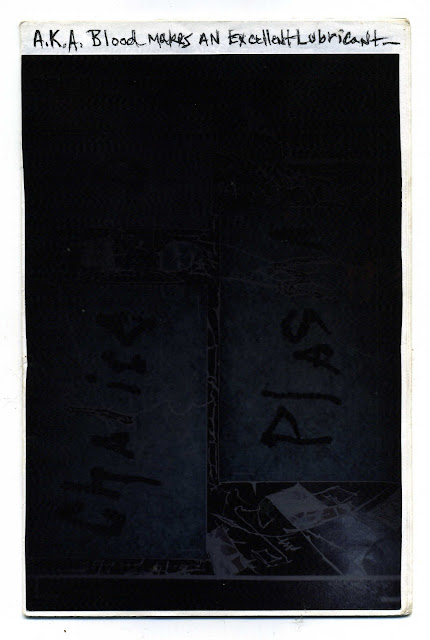 With a radiography film as the cover page, this zine has a very good ready-made artwork to start with. It contains personal thoughts and feelings by Patrick, a man from Dorchester, Boston in Massachusetts (USA)!

Quite a lot of introspection and self-analysis here, very deep emotions crashing with the reality of the outside world or the world created by outsiders. Inside 20 pages this collection of writings somehow touches the soul and the mind. Just amazing...! Enjoy it. 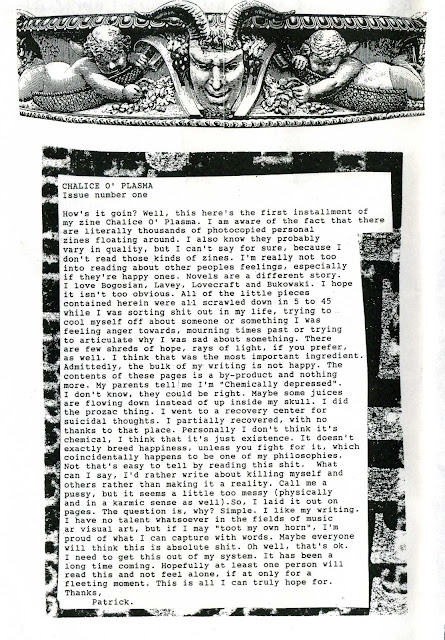