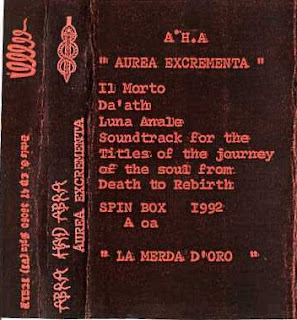 Another astonishing cassette by the genius Devis G.,I wrote about him already  when I posted the cassette by Teatro Satanico,that post is here.
I also already posted some music by Abra Had Abra,here
the split tape with Nigredo.
I passed this rip to Vita Ignes Corpus Lignum 5 years ago,I am going to re-post it here with the nice review by Crepusculum,thanx mate.
~f~a~r~a*w*a*y*
click me
[[[notes from ((F@R@W@Y))]]
" -the tape was distributed by SIN ORG a quite famous distro/label of industrial music back in the 90s in Italy, run by Gianfranco Santoro who was also doing a fanzine.
-the a side was recorded live in a social squatted center in Rovereto(northen Italy)-this squat was a very famous anarchist squat back in the 90s.
-the second side appears to be 2 separate tracks although it's listed as only one track-I separated the tracks as there was a very long silence in between, and I titled them part 1 and part 2- I think the only one who knows the truth is the musician: Devis G."
Il Morto [thee dead] - tis brilliant shimmering ambiance with strange eruptions ov analog synthesizer work!! vocoded incantations, minimally clanging drum sequencing, and vibraphone-type synthesis are interspersed in this great live recording in which conversations occasionally appear from those who were witnessing thee spectacle in this appropriated venue..
Da`ath [believe this title tis a play on thee word death] - More great shimmering occult atmospheric sonorism!!
Luna Anale [anal moon] - tis an Italian priest giving a sermon about rock music and satanism, and about other priests finding out about rock records having subliminal satanic messages..
Soundtrack For The Titles Of The Journey Of The Soul From Death To Rebirth
Part 1 - one may think here ov thee coiled serpent ov thee kundalini; as thee astonishing synthesis rises from thee base ov thee spine [Sushumna] to top of the head merging with the sahasrara, or crown chakra.. Thee arousing of kundalini tis said to be thee one and only way towards thee realisation ov gnosis or divine wisdom..
Part 2 - wavering analog synthesis with a slow and elusive melodic line is soon met with excellent tabla accompaniment for what tis assumed here to be thee rapresentaion ov thee rebirth ov thee soul...

Track listing:
A1 Il Morto
A2 Da'ath
A3 Luna Anale
B1 Soundtrack For The Titles Of The Journey Of The Soul From Death To Rebirth 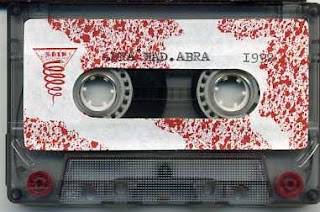