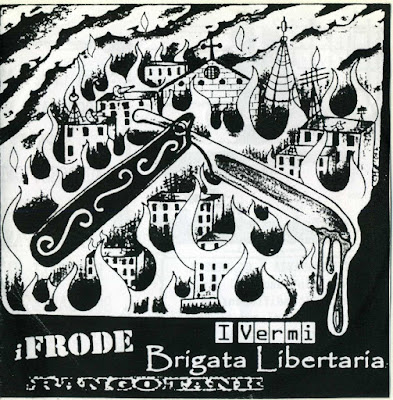 4 ways split  co-self released CD-r by 4 Italian bands playing street/oi punk but I Vermi playing a sort of 60style garage rock yet all united in the DIY spirit and the antifascist and squatting  ideas. 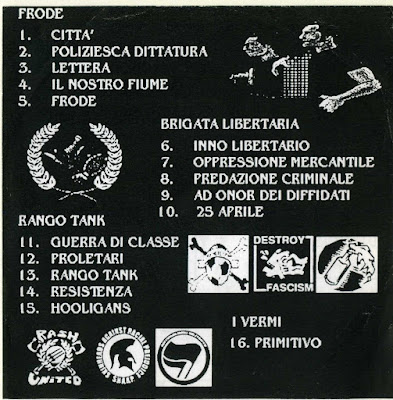 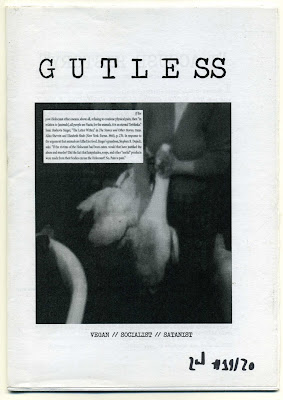 A fanzine full of personal writings about animal rights , socialism and a few other ideas, reviews of punk gigs, a report about Yangong Calling:indipendent movie about the punk scene in Myanmar and an article about Demogorgon. 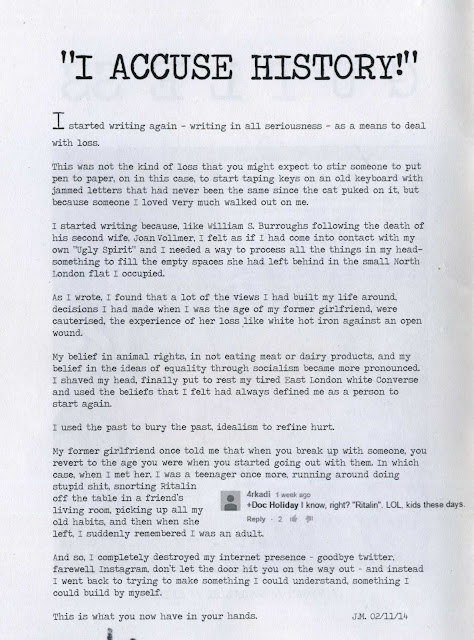 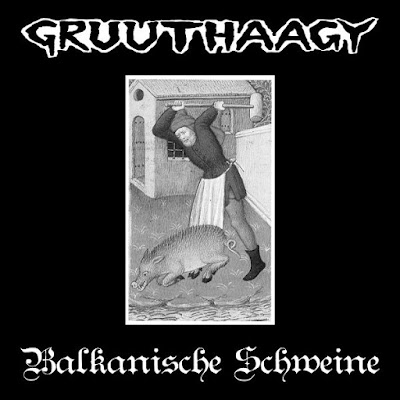 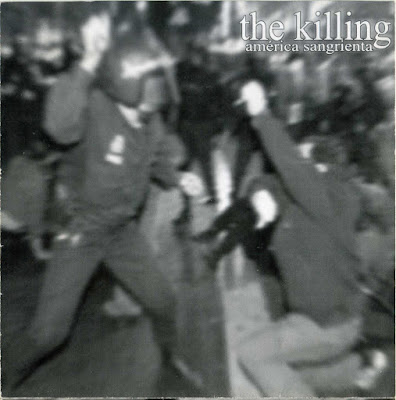 19 tracks of pure violent grindcore on this cd by this Argentinian trio!The folded cover sleeve reports lyrics and info.It is the first production by Terrorist Productions,a label that I suppose it is from Argentina too,but I do not know much about it.

Grind to the Core. 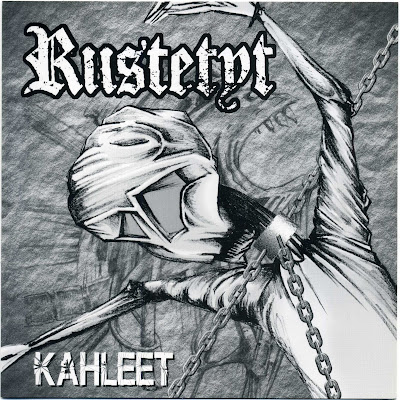 A punk/hardcore band from Tampere, Finland, founded in 1981. The band was originally called Cadgers and recorded one split 7" before changing name to Riistetyt.Their actual webpage is here. 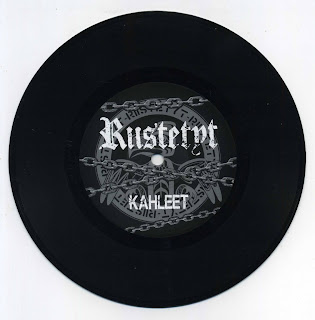 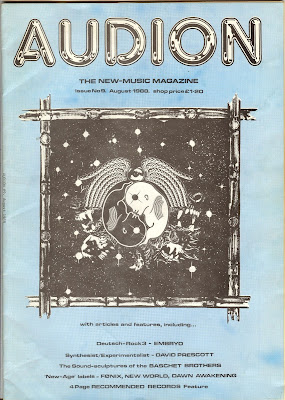 Number 9 of this english magazine made in Leicester by Steve and Alan Freeman + friends, on the end of the 80s.Focused on experimental electronics and industrial music,it is a fantastic tool to explore the underground scene of that era. 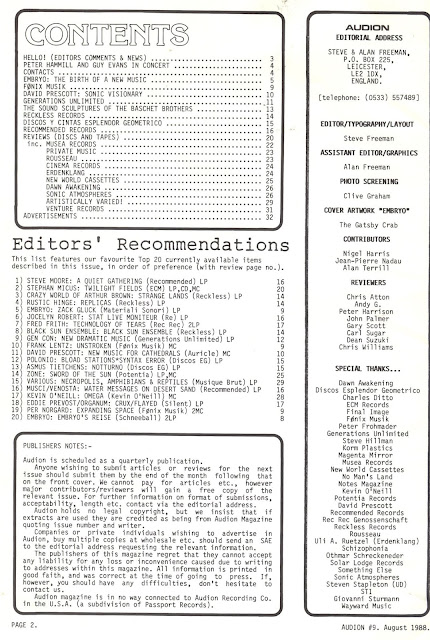 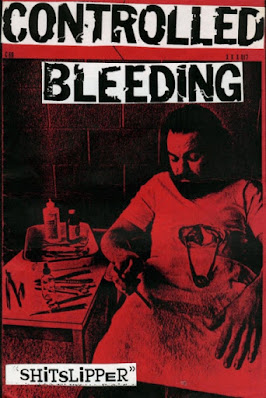 Though they began playing music in a style akin to instrumental art rock, a move into violent power electronics in the mid 1980s set Controlled Bleeding on a course that would take them through industrial, ambient, free jazz, noise, dub, progressive rock, sacred music, dark ambient, classical and musique concrète. To their detriment, the group was not concerned with generating or maintaining an audience, relying instead on spontaneous inspiration - often the cause of alienation amongst many of their listeners.

The band's only constant member is Paul Lemos, although early band members included Jack Salerno, Dave Southerland, Gary Pecorino and Tony Meola, a stable line-up was not attained until the early 1980s, with the addition of Joe Papa and Chris Moriarty.

Moriarty departed circa 1994, however he and Lemos continued to work together on side-projects such as Joined At The Head, Skin Chamber and Fat Hacker, whilst Lemos and Papa pursued further sonic experiments with Controlled Bleeding, as well as releasing music under their own names. After the deaths of both Chris Moriarty and Joe Papa in the late 00's, original member Tony Meola re-joined the band on drums. The current guitar-and-drums version of Controlled Bleeding plays instrumental rock songs influenced by Krautrock (notably Can) and progressive rock.

On 11th February 2020, Paul Lemos announced via the official Controlled Bleeding Facebook page that the band is no more. (all info from Discogs)  click me 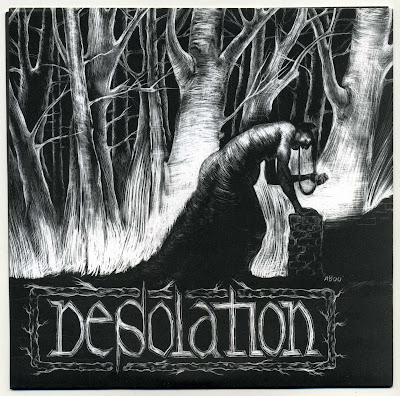 Heavy distorted hardcore crust from San Francisco, California that was around from 2002-2009. Members of Born/Dead, Strung Up, and Scurvy Dogs.

This ep was released also by the Italian Sly Records and my copy is from this label :  D.I.Y. hardcore punk label from Venezia. 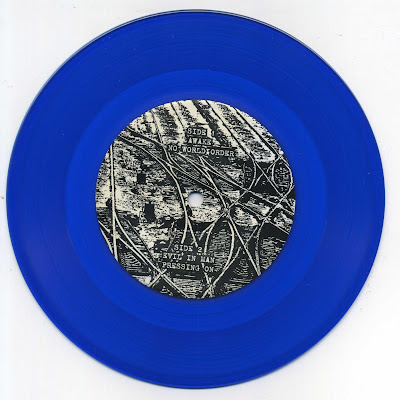 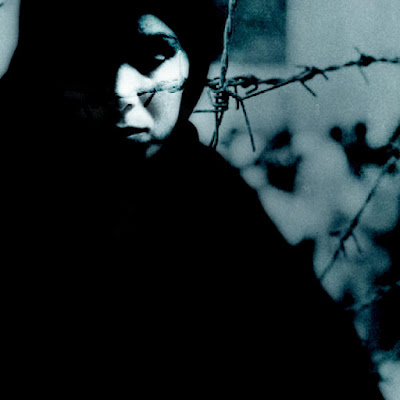 Khan Younis refugee camp is located about two kilometres from the Mediterranean coast, north of Rafah. It lies west of the town of Khan Younis, a major commercial centre and stop-off point on the ancient trade route to Egypt.

Fleeing their homes during the 148 Arab-Israeli war, 35,000 refugees took shelter in the camp. Most were from the Be’er Sheva area. Today, Khan Younis camp is home to 87,816 refugees.
Life for nearly all refugees in the camp has become increasingly difficult because of the blockade on Gaza, with has caused a dramatic deterioration of socio-economic conditions, including ever growing unemployment and poverty rates. Fewer and fewer families can provide for themselves, leaving a staggering proportion of the population dependent on UNRWA’s food and cash assistance. As in other camps across the Gaza Strip, basic hygiene is another big concern with 90 per cent of the camp’s water supply being unfit for human consumption.

BedouinDrone, drawing inspiration from the conflicting moods of the Middle East. War, prayer and the pressured condition of Arabic culture are the central themes . Drawing attention to political subjects rarely touched upon by the Western electronic music canon. BedouinDrone utilizes techniques of ambient and noise to immerse listeners in the tense state of the current Islamic world. click me 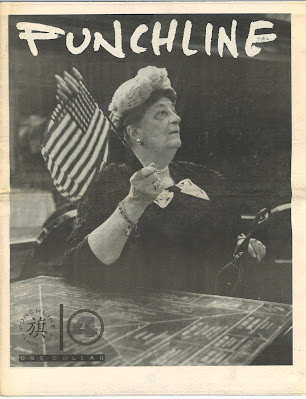 Number 4 of this legendary magazine, each issue dedicated to a different subject.I have already posted the number 7.5"cop"the Number 5 "WARning" and The number 13 "Static Elect Trickery". plus N12 "Age Of Discover Up" and N14 Read Our Lips.

For whoever missed the other posts about this great magazine: this was the amazing graphic work created and assembled  by John Yates and friends. I must write a BIG THANX to John, not only for giving me permission to post his excellent magazines but also to actually providing this digital copy.A webpage about his amazing graphix work is here and you can explore there his great art-works, books and related subjects. A facebook page about Punchline is here.

This is unquestionably a classic of the underground press from the last century.
Enjoy it. 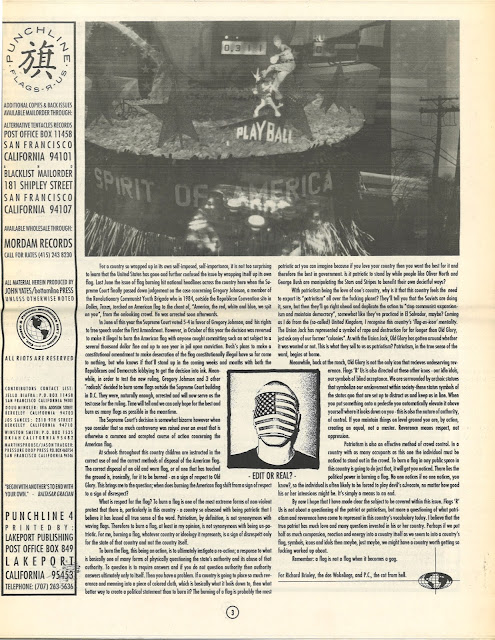 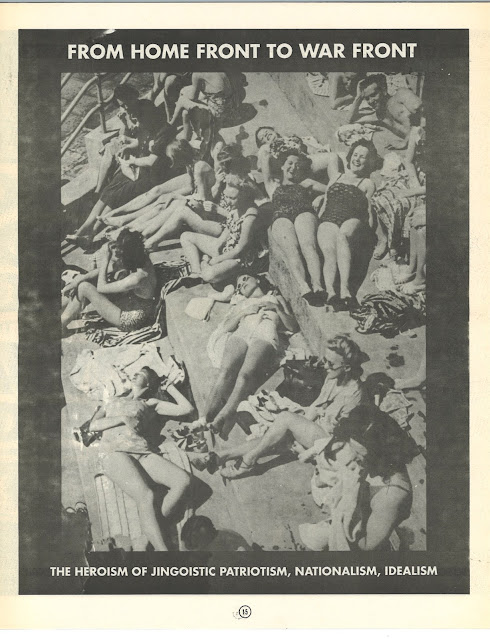 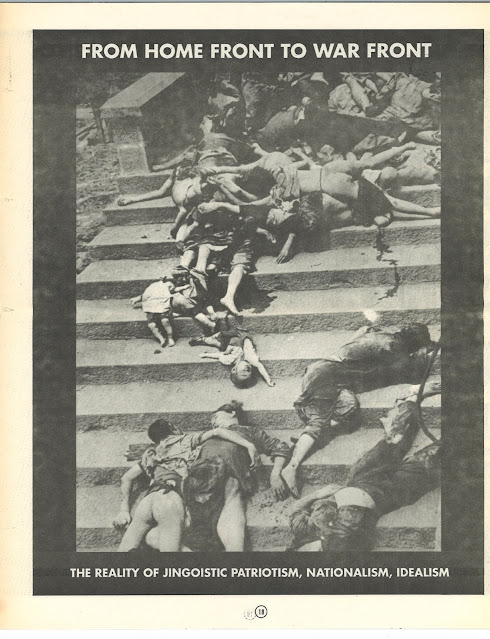 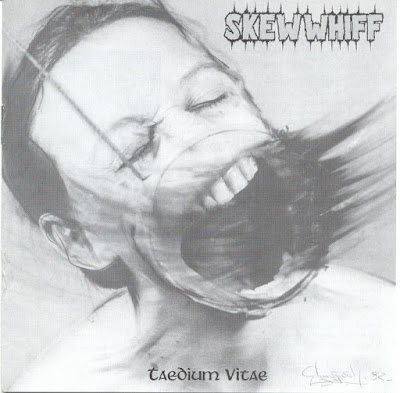 Another side project of the legendary Hiatus from Liege (Belgium).In this great album Azill(guitar) and Wills (Voice) join Ross of the American band Medication Time and bassist Nico from their hometown.Their furious crust punk reminds me some passages of the last album by Hiatus.It came out with a long booklet reporting the lyrics and info.(all the scans provided here). 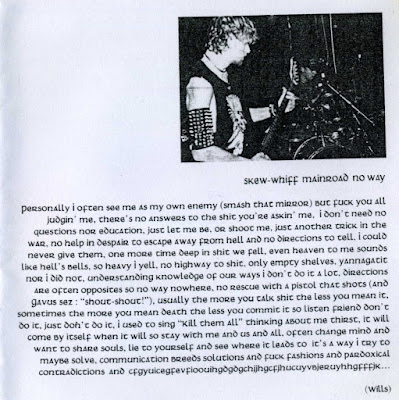 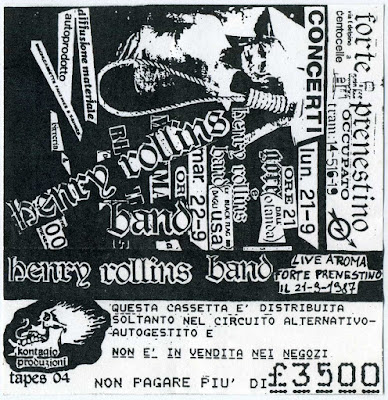 Lo fi Recording of this legendary gig by Herny Rollins band at the famous Forte Prenestino squat in Rome.The recording isn`t the best and I would say that this tape is for the die-hard fans of the famous singer.

Kontagio Produzioni Tapes was a small distro releasing mostly live tapes recorded in this massive squat(probably the biggest in Europe).
Forte Prenestino is, in fact, a fort squatted on the end of the 80s and still alive and kicking. 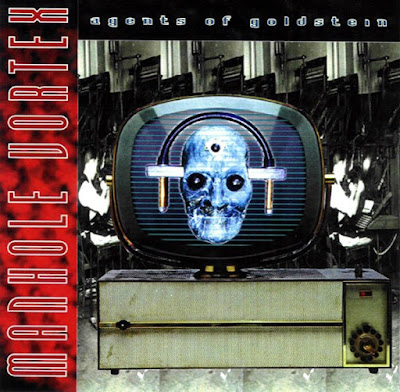 Great electro industrial CD by this EBM American band.As far As I know this is their only production.

DEAD SILENCE - Hell, How Could We Make Any More Money Than This? -(Profane Existence-USA-1994) 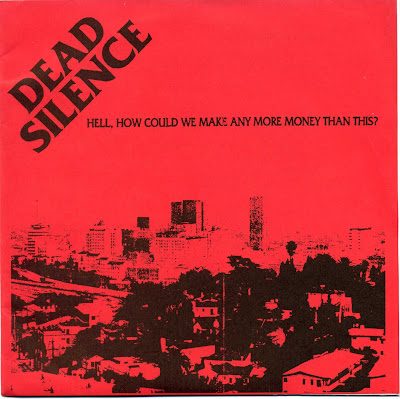 Dead Silence arrived on the scene in 1984, they were politically outspoken to the point of being labeled as preachy. This sort of approach ran headfirst into the ‘Don’t rock the boat too much’ philosophy of the Denver scene. The band was hardline on animal rights and vegetarianism, though not all band members shared the same level of passion that Kevin Vulture, the ad hoc leader of the band did.

Say what you will about Kevin and company, but over the years they honed their craft for combining politics and music. When the band was on stage, Kevin’s diatribe backed by a wall of sound set the tone and commanded the room’s attention. After forming, Dead Silence initially played shows in Denver then spent their later years playing in Boulder where they had a stronger following. Despite the short physical distance between Denver and Boulder, the attitudes and lifestyles were fundamentally opposite. Dead Silence seldom played Denver proper past 1985. During an interview in the 8 Flights Up fanzine Kevin and Carl stated: "We don't fit into the music scene in Denver because...Certain bands have a monopoly. We don't fit into the BumKonBrotherRatFluidAcidRanch clique so we haven't played Denver since 1985."

The band was prolific in releasing records and touring as Kevin kept the vision alive through many incarnations spanning a 10-year period. In hindsight, what I appreciated about Dead Silence was they chose a path and never compromised their integrity. I recently reconnected with Ted, the drummer. Since he and Kevin were the original members who stuck it out for the first 5-years, I thought he’d have a unique perspective on the band. Lorn, another original member also shed some light on a couple of the questions. It was a pleasure catching-up with Ted after more than 25 years. He had a couple of beers during the course of our one-hour conversation, which was a perfect pairing for his Texas accent.

(from Punkerbob.com where you `ll find a long and interesting interview to this great band)  click me 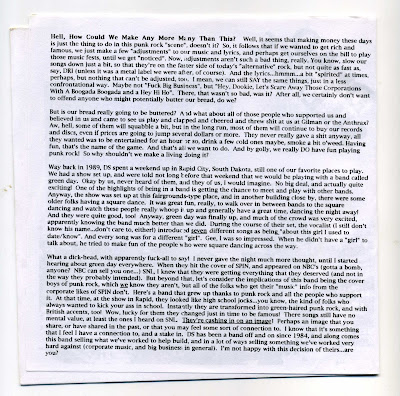 Sleeve is a parody of the Bad Religion How Could Hell Be Any Worse? LP sleeve. 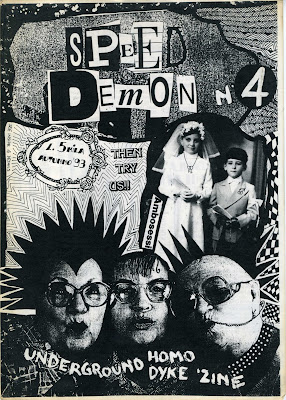 Number 4 of this underground homo zine, Speed Demon has been the very first Italian queer publication in the early 90s made by Flavio and Orlando in Torino. I have already posted the number 3 and the First Issue  released in 1992.

A very good fanzine from the last century.Only in the Italian language. 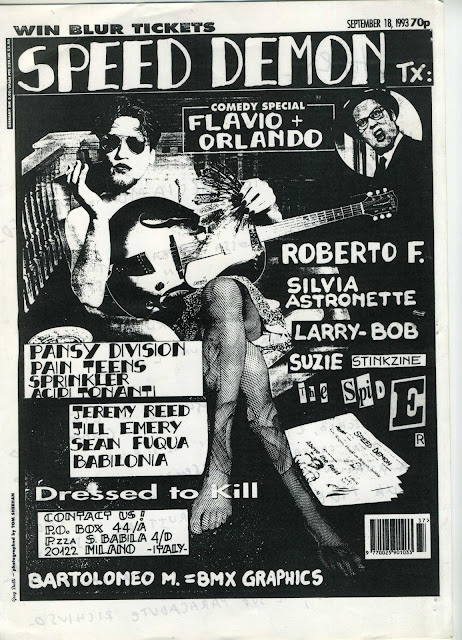 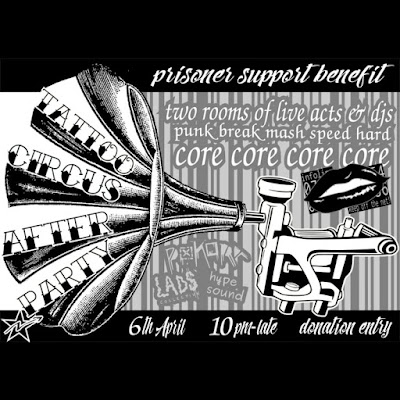 MEUS DEUS
POKORA SOUND SYSTEM click me
Posted by faraway at 12:47 No comments: