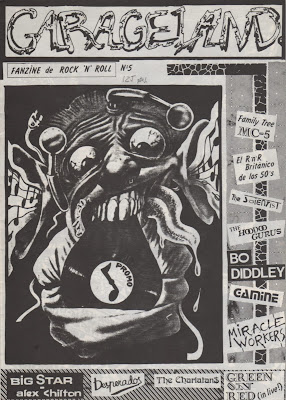 An old fanzine focused on rock`n`roll music, made in Madrid(Spain ) during the mid-80s.


In this issue, articles about the British R`n`R of the 50s, Miracle Workers, Hoodoo Gurus, The Scientists, The Charlatans, Green On Red, Gamine, Desperados, Do Diddley, MC5 + flyers and old pictures. 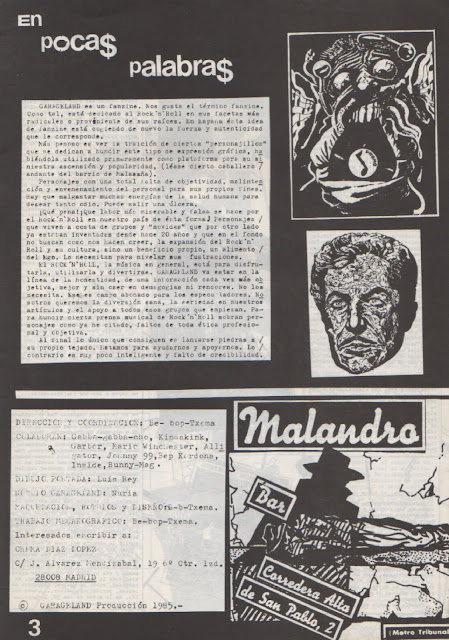 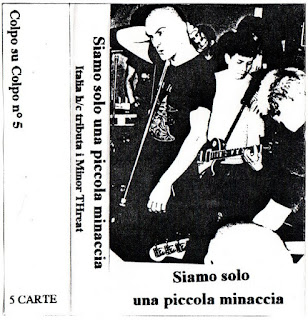 
Some songs are quite well played yet just a shadow-form copycat of the originals, the only one that really stands on its own, is "Stand Up" performed by LA. Choix as they infuse their personal touch and feel to that track.
"Filler" played by Supereroi is sung in the Italian language.

Colpo Su Colpo was a small tape label active in the mid-90s managed by Matteo Gigliucci in Follonica.
If you are a die-hard fan of Minor Threat then you might find this sampler interesting.
Enjoy it.
~f(a*r~a^w¬a~y:click me 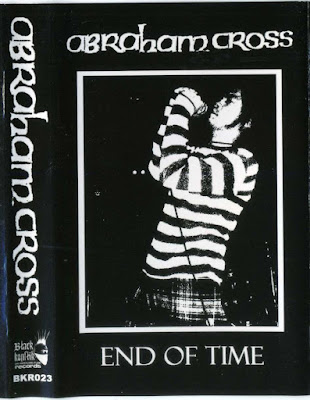 Abraham Cross is a band from Japan playing furious raw crust-noise punk. This tape was released on the Maylasian label Black Konflik Recs in 2007 and contains a bunch of tracks raging full violence and hate.
Black Konflik Recs is still very active, visit their blog here.
Up the punx.
:f(a*r~a{w_a(y}click me 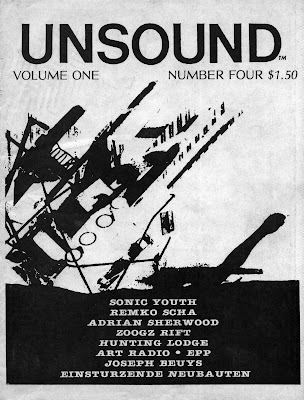 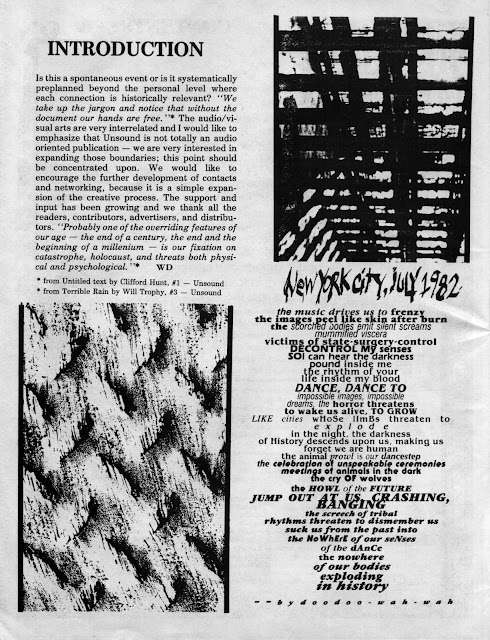 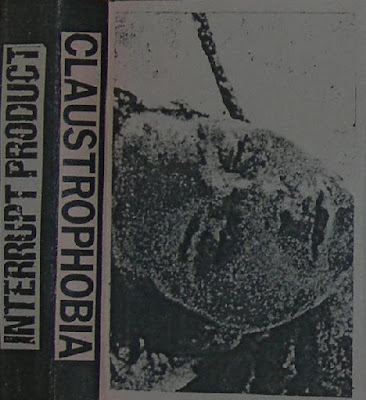 Another great compilation by the amazing Dutch label Interrupt Product and dedicated to the subject Phobia, I have already posted the sampler Schizophobia and the one named Necrobophia both released in 1989.

In this 90 minutes cassette, we find a number of artists playing old school industrial,noise-ambient, experimental electronics and more rather difficult music to digest.
Interrupt Product was a small tape label from Holland active during the 80s, it has a sublabel called Non-Interrupt, a sub-label still active nowadays.
Enjoy it.
:f(a*r~a)w_a^y:
click me 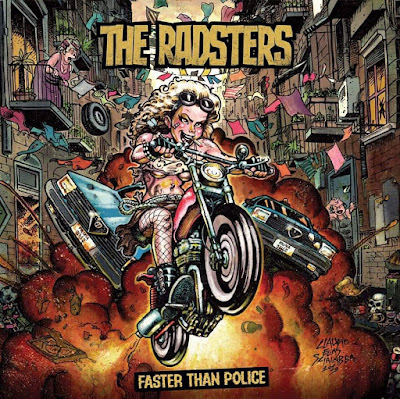 The Radsters is a band from Naples (South Italy) playing a raw form of straight in your face speed rock mixed with a good dose of energetic punk: think Motorhead meets Turnonegro on a battleground.
Formed in 2008, connected to the squat scene of the Partneopean capital after a few line-up changes they established a very tight combo and have played many gigs in and out the Italian boot.

Their first 7inch "The Radsters" was released in 2012  followed by a full- length cd "The Wild Bunch" in 2015.
This is their last production: a 12 inch with 8 tracks on one side while on the other we`ll find a nice screen-printed original drawing. 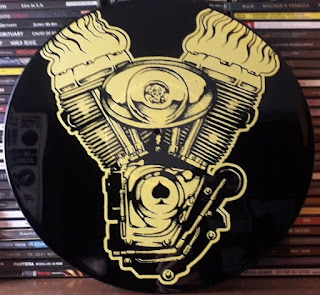 You can find the discography on their Bandcamp Page where you can get their music choosing your price, while you can read the last news on their FB Page.

For all of you curious to know more, a very good and in-depth interview
has been published on the webzine Son Of Flies last month.
To complete this post I am attaching the last video.
A big Thanx to Peppe (the bass player) for providing links, pictures and related info.
If you are into fast, aggressive and powerful punk`n`roll then you` ll love The Radsters, this last 12inch is definitely a good one.
Enjoy it.
:f^a~r{a_w)a~y*
Posted by faraway at 05:41 No comments: 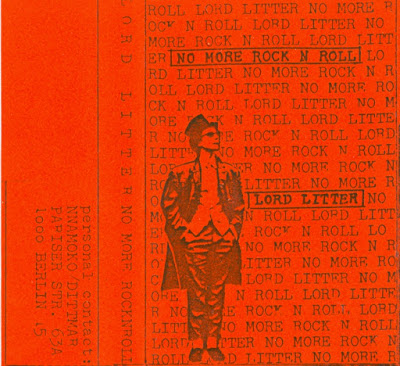 Another great cassette by the eclectic Lord Litter, I wrote about him when I have posted his tapes Space Age and The Place Where The World Collide.

Here a quote by him taken from his actual webpage  where you can read about his history, releases, related projects and his incredible radio shows.

"I started releasing my music in 1984-"the cassette scene revolution" made it possible to record/duplicate/release/distribute from your living room. Whenever I had some songs finished that presented a certain period,
I released them with the help of an uncontrollable amount of small labels- all just there for the music-worldwide.
First on cassettes, later on CD-Rs. I never even tried to make money with my music by cooperating with any kind of "industry".
All in all, I really have no idea how many releases I have out. At the least 40 I guess, plus countless tracks on compilations, cassettes/vinyl /cd." 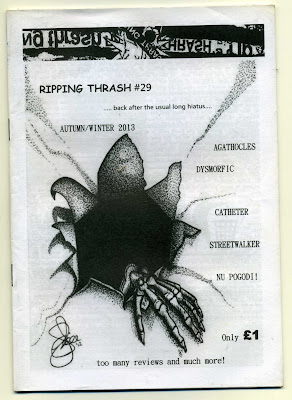 Number 29 of this historic English zine made by Steve in Burton-On-Tren, I have already posted quite a few issues released back in the 90s.


It`s still active as distro as well and you can check its actual webpage
where you`ll find info about the zine, the distro, the label and more. 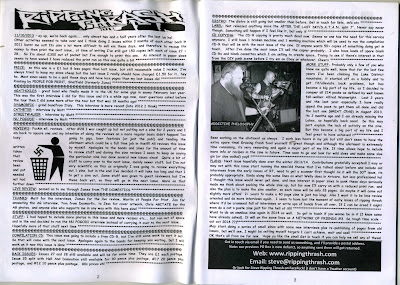 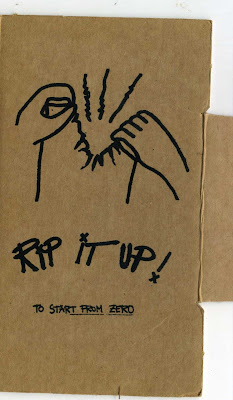 Rip It Up is a band from Grenoble (France)! This is their demo released in 2011, they play a melodic yet powerful HC punk reminding me some amazing old school HC punk bands from the past.

I saw them live and they blew everybody away, a great live act.

This cassette came out in a special cardboard package with a lyrics sheet. You can get it for free from their Bandcamp Page where you`ll find also the last album "Morbid Laws" released in 2019.
For all of you who are curious to see the nice and original package/cover sleeve and read the lyrics then you can get it here.
Enjoy it.
/f:a/r_a~w`a/y: 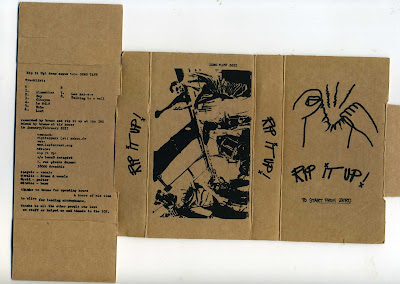 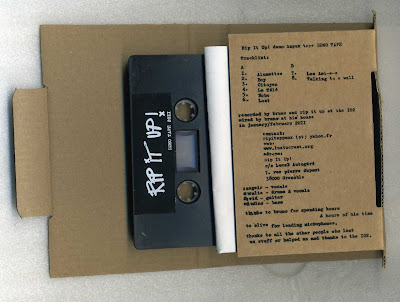 Labels: 2011, anarcopunk, france, from start to zero, hc punk, rip it up, self released

Another great production by the mighty CCC CNC NCN a radical collective from Torino(Northern Italy) coming from the anarchic/antagonist underground scene, combining old-school industrial sounds with conceptual records and live shows about unpopular topics, such as suicide as an extreme choice of freedom, mass control, and oppression.
I have already posted Performance Soundtracks 2005/6
and their masterpiece album released in 1989 "Suidicio Modo D`Uso"
and  the Cd+7inch Proclami released in 1993.
An FB page about them and their recent activities is here.
And this is their actual webpage

This video was released 2 months ago and it is about the escape of thousands of southern Italians from the North of the Italian boot due to the Covid 19 fears/paranoias.
Enjoy it.
:f*a)r_a^~w{a:y_ 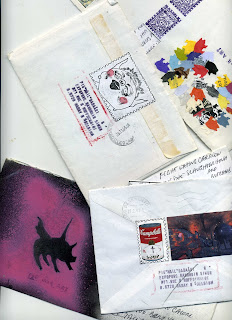 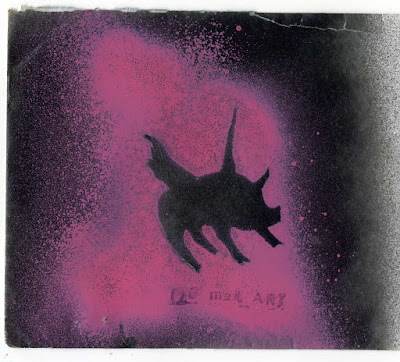 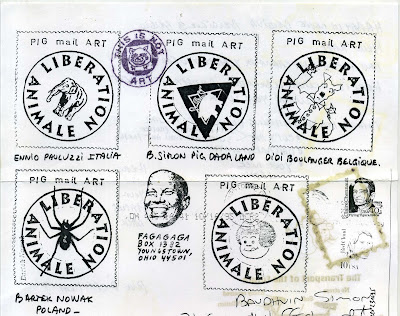 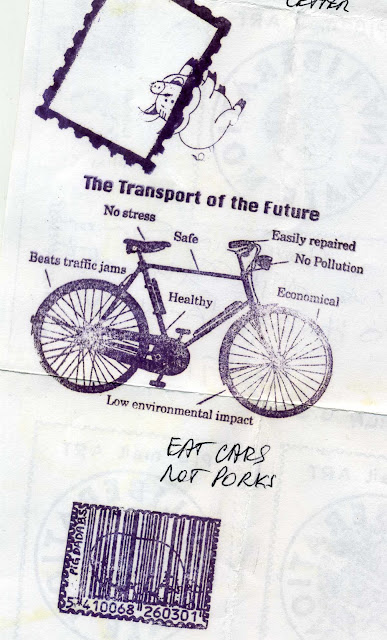 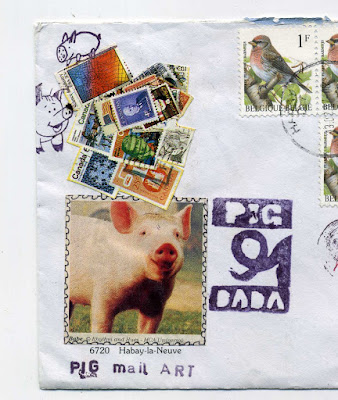 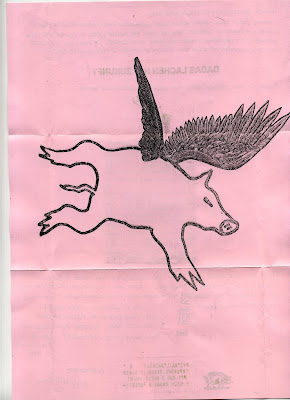 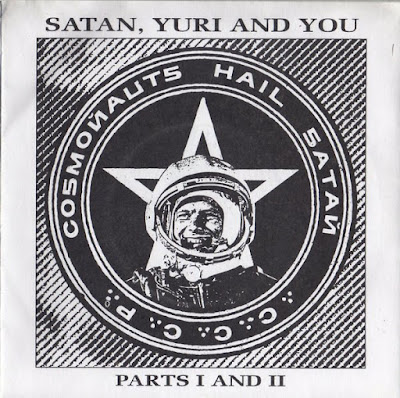 Legendary Cosmonauts Hail Satan from Leeds released these two 7 inches in the mid-90s.

I wrote about them already when I posted their tape Apollo 666
and the compilation Crazy Subjugated Astronauts
released by Joukkomurha Products in Finland.
Hyperdistort, slow malignant industrial/punk sounds waved with loops, strange voices and grim energy. Great stuff from the cave of the 90s.
Enjoy it.
:f_a/r^a*/w`a<y)
satan,yuri and you
hellraiser 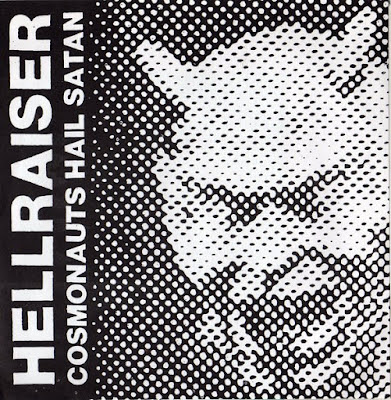 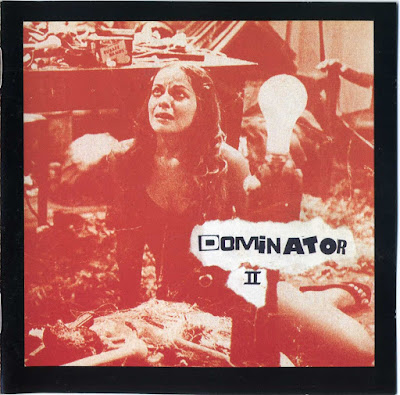 Dominator was a British project formed by Mick Holmes, Vince Millburn and Terry Harper, active during the 90s, they have released 3 CDs,1 7ch and 1 cassette.
A Discogs page about them is here.

12 tracks on this cd offering us a good dose of power-electronics.
Enjoy it.
f(a*r^a¬w:a/y
click me 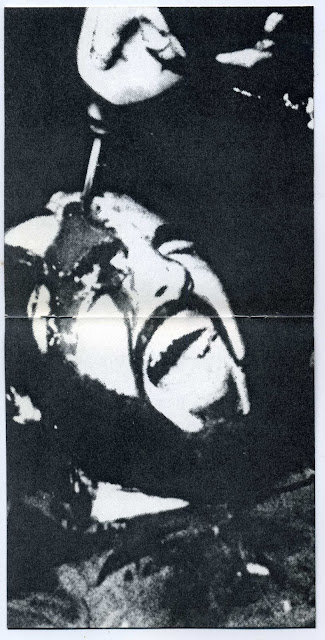 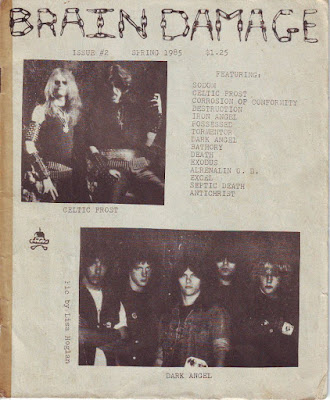 The second issue of this American fanzine, I have posted already the first one.

Made in California by a bunch of metal-heads in love with the thrash metal and all things extreme metal.
This issue features interviews to Sodom, Celtic Frost, Corrosion Of Conformity, Destruction, Possessed, Dark Angel, Bathory, articles about Iron Angel, Tormentor and Death + music reviews and some cool pics.
From the very underground press network of the lively metal scene born in the early 80s.
Thrash till you drop.
:f*a~r}a:wa*y:
click me 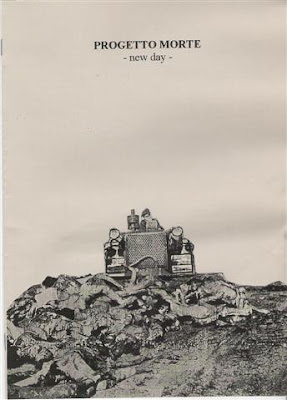 Progetto Morte was another project by Marco Corbelli, the artist covered in this blog quite a few times.

On this cassette, Marco is joined by Walter Piano who wrote and recited the lyrics. The music is a miasma of minimal noise-ambient where Walter waves his nihilist pain`s poetries.
Slaughter Productions was the label managed by Marco Corbelli releasing mostly his own music and few other associated noise artists.
To complete this post I am adding the video of their performance at the Dracma in Torino on the 20/01/1996.
Enjoy the death industrial ambient.
:f(ar(a:w^a~y:click me 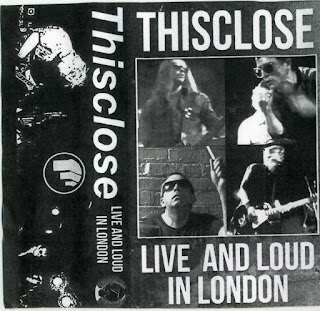 Thisclose is band from Scotland playing a raw form of D-beat with a yelled high pitch vocal.

This tape captures their intense energy as a live act during their gig at the Scumfest held in London in 2013. Their Bandcamp page is here where this tape isn`t listed but you`ll find many other cool productions. A Fb page about them is here.
Enjoy the D-beat.
:f(a*ra/w~a_y:
click me

Labels: 2013, crust punk, live and loud in london, not on label, thisclose, uk 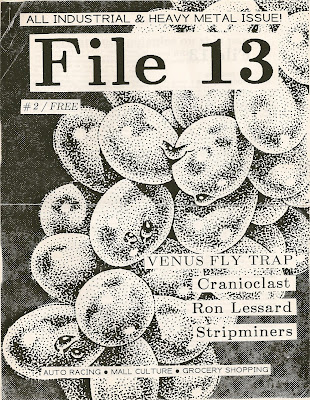 A short yet very interesting zine created by Mark Lo in Eatontown (NJ) on the end of the 80s.

In this second issue interviews to Papa Stripminer, Venus Fly Trap, RRR Records, an article about Cranioclast and some gigs/music and zines reviews.
Enjoy it.
:f*a-r)a*w~a_y:
click me 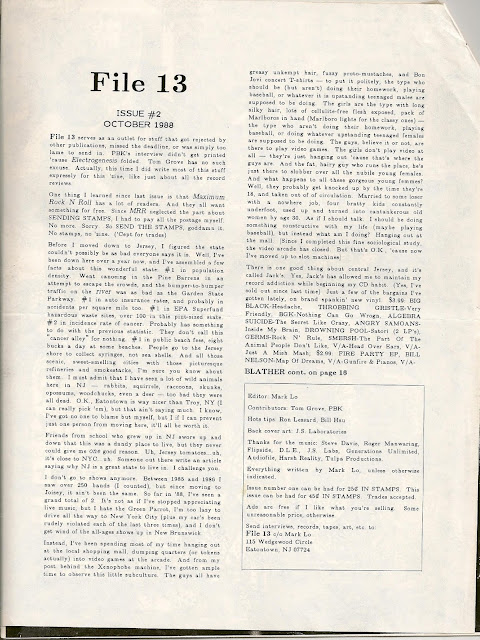