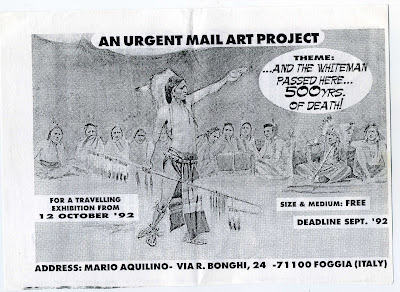 The flyer /Mail Art invitation for the project "... And The White Man Passed Here...500 years of Death!",Mail Art Project launched by Mario Aquilino in 1992.

I have posted  the  documentation about this project. Against the Celebrations of the 500 years of Mass Murders and Colonisation. 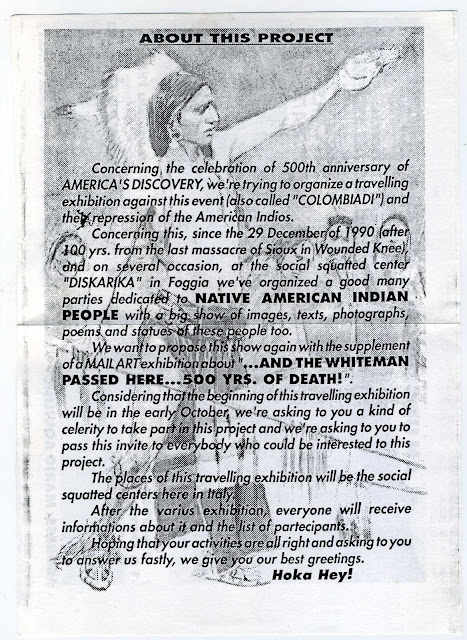 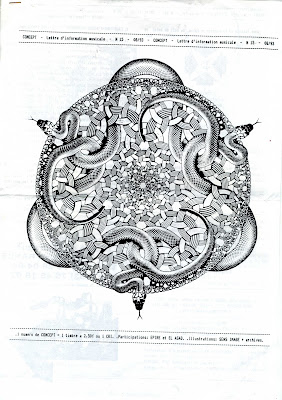 Concept was  a newsletter published and distributed every 3 months by the aristic collective Cartel Experimental,they were also
producing tapes of industrial and noise music with a special interest in the avant-garde and theatre`s soundtracks.

I have already posted many productions released by this Art-Collective!All the cassettes were chrome tapes coming with colour sleeve and inserts on coloured xerox copies.Limited edition of 50 copies.This bulettin is only in French language. A redecouvrir. 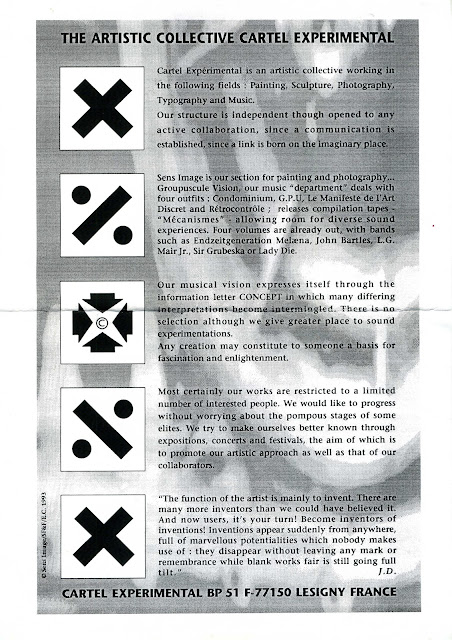 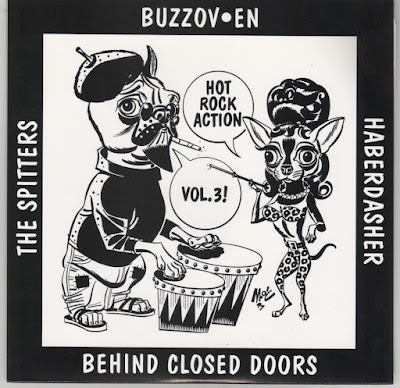 Reptilian Recors: US label, began in 1989 as an underground music shop in Baltimore, MD.

Reptilian Records has shed it's skin, closing the local Baltimore shop in 2009 but continuing to release music on the label, now based in Philadelphia, PA.     click me 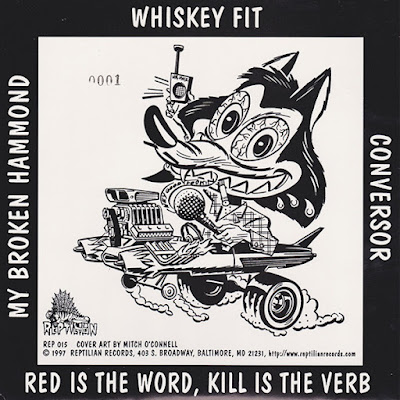 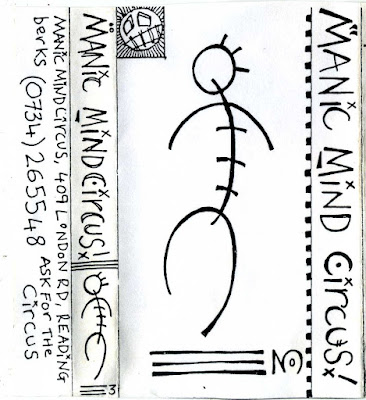 Another great tape by this misterious project hailing from Reading (UK) and active in early 90s. Also in this tape there are some exquisite tracks mixing experimental dub with various influences. The use of the  voice is definetly very punk in some tracks while the electronics travel wild with effects and fantasy.

A very interesting dub production on tape, it seems to be his third tape but on the Bside of the tape we`ll find "Must Maintain Control",which I reckon it is a subtitle.

Anybody out there with more info about this project? Please leave a comment. Enjoy it. 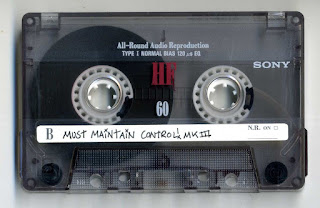 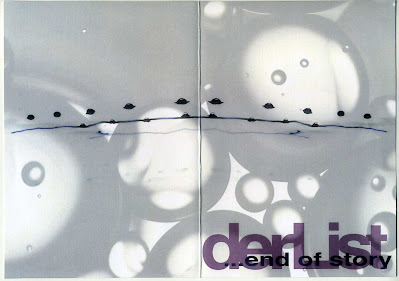 Derlist is a confusional state of mind, the man left at the mercy of events.
It is blood gushing forth from an injure, a scar unable to be healed.
It is an exactmoment after which everything is not like ever before.
Words are un-necessary, none of the above can be mentioned that way.
Everything is dark and empty, an unheard scream, it is like going adrift losing yourself where no one ever will find you.
It is the state of mind of those who lose their minds.(from Alampo Records webpage) 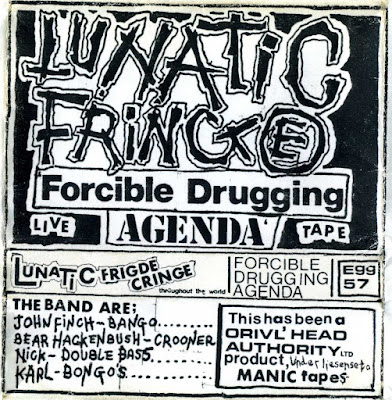 The band Lunatic Fringe was conceived at what was known at the time as ‘Monks Park Secondary Modern’, in North Bristol in 1979. In a scenario which admittedly sounds clichéd, but which was at the time surely being repeated in schools and youth clubs throughout the U.K., a group of disaffected teenagers from dysfunctional families found a common cause and a means of self-expression and escape through Punk Rock music.

Already pronounced ‘dead’ as a movement by media commentators, in fact a second generation of punk bands were at the time enjoying mainstream coverage and were playing the length and breadth of the country, spreading the punk message to a much larger audience than it had previously reached. This ‘we’re doing it, so can you’ doctrine provided the inspiration for us to form a band, regardless of the fact that none of us could play, let alone own, any musical instruments at this stage. It was just something that we felt compelled to do, for better or for worse. 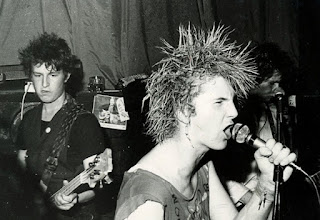 The name for the band was kindly provided by a head teacher, who one day misguidedly announced at a morning assembly that he believed that the ‘Lunatic Fringe’ elements would soon be departing at the end of the school year. As we perceived that a ‘presence’ was in fact still going to be maintained in the school, we decided to appropriate his phrase as a band name. With that sorted, the group began to take shape over the next 12 months as equipment was acquired and a stable line-up evolved. The band managed to achieve a basic competency, playing covers of favoured bands such as Buzzcocks, Sex Pistols and Stiff Little Fingers, plus ‘Wild Thing’ (more The Goodies than The Troggs version). We were keen to write our own material though, and by mid-1980 had put together a small set consisting of about half covers and half originals.

There never seemed to be any question about lyrical inspiration. We were all becoming socially aware, and were angered and frustrated at the hypocrisy, brutality, injustice and racism that we perceived our society to be founded upon, and it made sense to articulate this frustration through our songs. In addition, many will recall that at the time adopting a punk lifestyle meant living with the constant threat of physical and verbal aggression, not least from the police, as well as blanket banning from pubs, cafes and music venues. Situations we were encountering on a daily basis would therefore also influence our lyrics, as was the case with many of our contemporaries.(excerpt taken from Bristol Archive Records)  click me 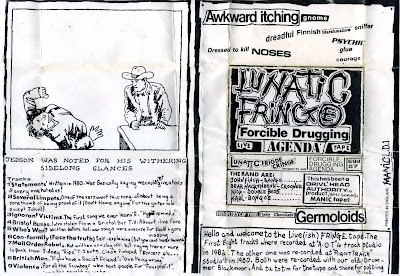 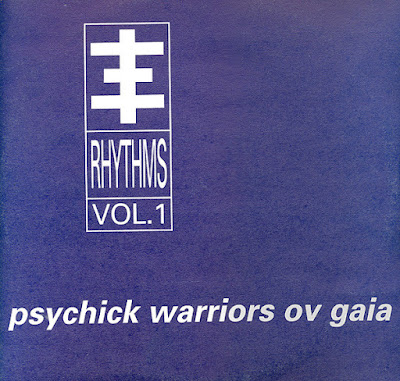 On rear of sleeve:

"Warning! This object has nothing to do with art or artificial intelligence. This double package (12" version) was designed for mixing, for breaks, for possession, for collectors." 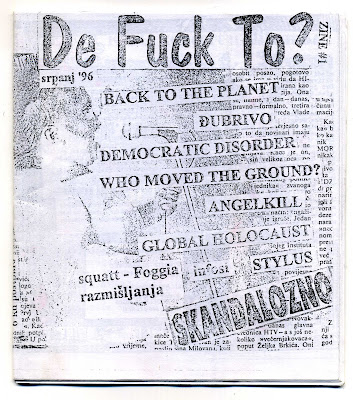 Anarcho-punk fanzine from Croatia focusing on music and politics.The interviews to foreigner bands are in english while other stuff is in croatian language. Articles against vivisection, squat reports, rants and reviews are in Croatian but there is other stuff in english too,it s a mix` n` mash of info and stuff, a bit chaotic and very punk, yet this is pure underground press!!Enjoy it. 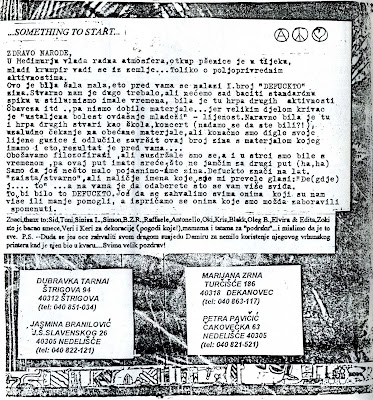 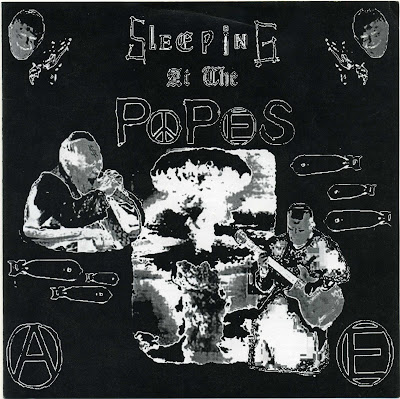 Sleeping At The Popes is an american band playing raw punk with political lyrics,the recording is kind of low-fi and it suits very well their music.This 7inch came out with a folded cover sleeve reporting a few info and the lyrics too.Enjoy it.

Limited to 500 copies, all on black vinyl.
B2 is named as 'New South Africa' on the the labels.

Sleeping At The Popes at various stages of their existence included the members listed in the credits, although duties would change at times. 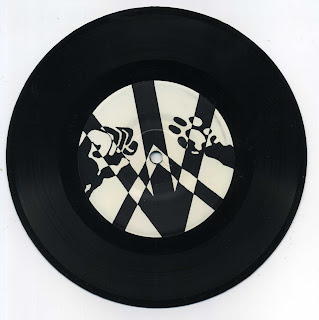 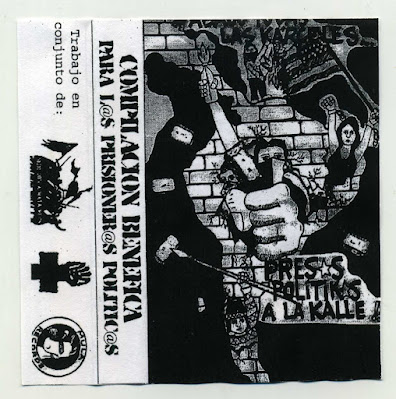 Long cassette compilation with punk bands playing various styles: HC Punk, Crust, Grind! It was benefit for political prisoners. Many bands sing in spanish as this is a joint productions of South American labels and beside one German band,all the rest are from Latin America countries such as Chile, Mexico, Peru, Brasil... 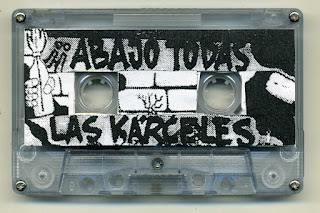 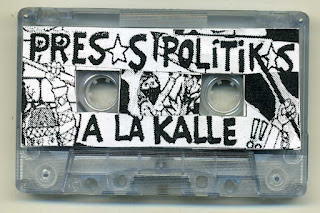