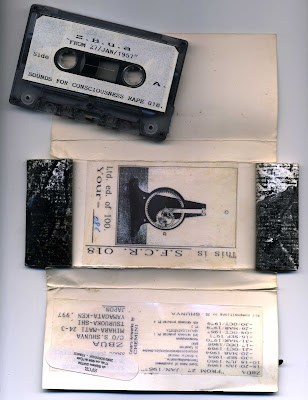 ZBUA is the solo project of Suzuki Shunya of Tsuruoka, Japan. According to the artist, the intention of this abbreviated name is to say "I'm an example of non-personality". Suzuki also published an industrial fanzine by the name of IR, which published at least two issues. His current activities are unknown.
This tape came out as an edition  of 100 hand-numbered  copies  folded into a photographic print with printed transparencies attached.
The label is the amazing Sounds For Consciousness Rape,defunct French label active in the early '90s in the industrial/noise area and well-known for its limited edition releases.
Enjoy it.
~f~a~r~a~w*a*y*
click me
Trackslist: