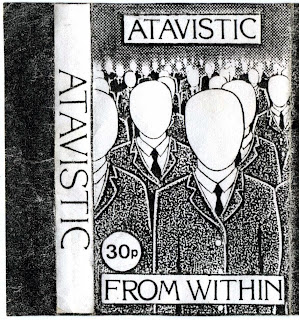 ATAVISTIC formed from the remnants of two earlier Punk bands MENTAL BLOCKAGE and CRIES OF AGONY, are perhaps the most well-known band to emerge from the Kent Hardcore Punk scene of the 80s.

The chaotic hybrid of Crust/Grind which featured on their first two 7" EPs evolved into a slightly groovier Motorhead/Blues-tinged Thrash on their only LP, complete with the addition of distorted harmonica solos.

John was later tragically killed in a motorcycle accident.
Patrick McKernan went to become a solo folk/blues performer.(info taken from their freewebs.com  page)
This demo is very rare nowadays:a classic from the past with a fury and  an energy still raging on...
~f*a^r*a^w*a^y~
click me

Labels: 1986, atavistic, crust punk, from within, grindcore, self released, uk