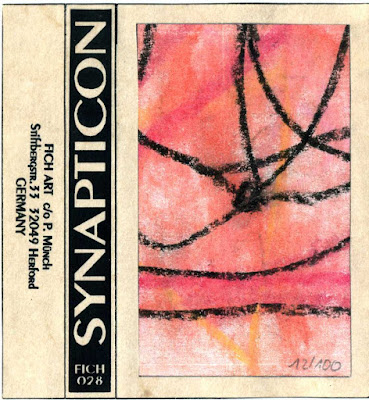 I wrote already about Fich Art when I posted the compilation tape Transmission Two!
Here some info taken from a discogs page dedicated to them,it does include their actual webpage:
"Fich art was founded in late 1989 by the members of ars moriendi: moata-omen, asche and t.r.g. to promote their music.this leaded to some response in the so called tape- scene but not to commercial success. in 1994 asche ruled fich art on his own and so the focus changed. he released much more material of different people all more or less making dark ambient music. he is also working on remastering old tapes to offer them as cdr in a more comfortable audio format.
In 1996 he also started distibuting some ant-zen and related stuff, which you can also find among these pages.  Fich art is still a non commercial underground label featuring a huge backcatalogue of recent ant-zen artists like: asche, monokrom, morgenstern, synapscape and templegarden's but you can also find early recordings of imminent and hypnoskull.....and of the rorschach garden as well....
Enclosed to this website there is a small photo gallery with old and rare photos of the fich community and friends."

This tape came out as a limited edition of 100 copies and I guess that each cover sleeve had a different hand painted drawing.
Enjoy it.
~f*a~r*a~w*a~y*
click me