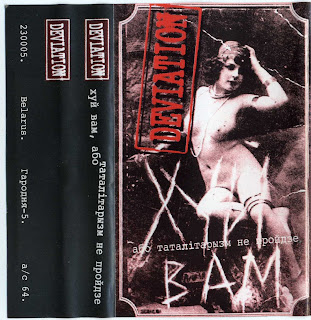 Deviation is a folk punk band from Belarus,I cannot recall how I got this tape!Everything is written in cyrillic characters so I couldn`t understand anything.
Eventually I asked my friend Al-Maytatu L-Habithu to provide translations of  the cover sleeve.
He did find also additional info in a interview online(also this written in russian) and he kindly translated some part of it for this post.
As far as I know there are few pages about this band yet only in russian so I am very grateful to  Al-Maytatu L-Habithu for providing all those informations,I can only add here a very big "Thank You".

"Huy vam, abo tatalitarizm nya proydze!"  is the title of this album and it means "Fuck you all, or totalitarianism will not pass!"Here you find all those useful info in english.
~f~ar*a*w^a^y
click me

Belarus was  a poor totalitarian post-soviet country in 90s. Guys with
long hair, earings, strange clothes could find troubles in the streets
(especially in small towns): fights, arrests, bans...
Those circumstances raised protests among the youth.
Deviation (sometimes deVIAtion) formed in small town Berestovica near
Hrodna in Belarus in August of 1993. Their first concert was in
November '93, in which they played  the song "Militseyskiy terror. Ubey menta"("Police terror. Kill cop!"). For this the band was arrested after their
first concert (the judge gave 10 days in jail to the vocalist, 15 days -
to the bassist and the drummer had to pay a fine). This is  how Deviation was born.After the court on Deviation a lot of rock bands in Hrodna had
problems with authorities. In their interview Stas (vocalist) said
that they were banned in their hometown, and never gave concerts in
Hrodna. But  they became famous in Belarus. And in the end of 90s they went on tour in Poland and Russia.
"Huy vam, abo tatalitarizm nya proydze!" is their second album. In 1997
they gained some popularity. The album was selling all over Belarus, but
with  title cenrosed as "…tatalitarizm nya proydze!" and sometimes
"…nya proydze!"
Their music is dark and aggressive - punk rock and hardcore sometimes
with influences of reggae and folk.They made themselves an image of
extremists. Living in dangerous times and in a dangerous country yet  they
didn’t compromise. The lyrics subjects are in anarcho-punk "no pasaran"
traditions: antisystem, antifascist, anarchism, against police &
authorities. They sings "how bad is Belarus, and it will be worse".
*Bielaruskaja vosien / Belarusian autumn was dedicated to Krasnyye Zvezdy*
Who is Krasnyye Zvezdy?
Krasnyye Zvezdy is popular belorussian pro-system (hypocritical) punk
rock band. "Deviation is like Krasnyye Zvezdy but conversely". Critics
often compared this two bands. Deviation didn’t like this comparison, and
they dedicated  the track "Bielaruskaja vosien" to Krasnyye Zvezdy.
Band is:
Stas - vocal
Vital (Kurkul*) – guitar
Andrey – bass
Dima (Balamut*) – drums
* "Kurkul' means "Meanie"
* "Balamut" means "Troublemaker"
Band is (as in booklet):
Stas - roar, moan, scream
Vital (Kurkul*) – electric and acoustic guitar, from time to time screaming
Andrey – bass, was silent
Dima (Balamut) – drums, from time to time moaning

All music and lyrics by Deviation (except track 5). Was used
belarusian folk song "Oh, rechennka, rechenka ..." ("Oh, river,
river…"), noises and samples from USSR documental film "Obyknovennyy
fashizm" ("Ordinary Fascism"1965).
info from interview: http://nestor.minsk.by/mg/articles/1998/30/0400.html
Sometimes the name of the band is "deVIAtion" (with three capital letters). Its a reference to soviet past. What is VIA music you read on wiki https://en.wikipedia.org/wiki/VIA_music