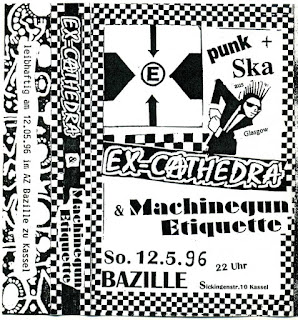 "Ex-Cathedra are an anarcho punk band from Glasgow, Scotland. They got together in 1991 and in late 1993 we heard about them after buying a copy of their first single on their own label. We did a single ‘Tresspass’ and then offered them an album. Their debut album, ‘Tartan Material’ was produced by Frankie (Leatherface) Stubbs. One more single followed a cover of Culture Club’s ‘Karma Chameleon’ then they were off. They are still going strong and I think they have a second album out on MoonSka records as well as a new compilation of early stuff including the ‘Tresspass’ E.P. You can usually catch them on tour playing all around the UK and Europe"(from discogs)
"Machine Gun Etiquette were a political punk rock band from Ayrshire, Scotland, formed in the mid-nineties by vocalist/bassist Rat Cunningham.
Machine Gun Etiquette released a number of demos through 1994-96 (“Revolution in the Head” tape as well as the “No Frills” demo tape.) The band released split records with Ex-Cathedra & Juggling Jugulars in the late 90s before finally releasing their 16 track debut album “Hate this city” (Problem Child) in 2000, as well as a single - the “Self Respect” EP (Campary Records). In 2003 Machine Gun Etiquette released their final album “Reality Check”, and played their final gig, supporting MDC at the Path Tavern in Kirkcaldy. A final 7” single was released on Campary - “Hate This City” - with a re-recorded and re-worked version of “Joe Public” as the B-side (featuring Stiff from Ex-Cathedra/Scunnered performing a ‘special’ “Evening Times!” intro…)"(from lasfm) 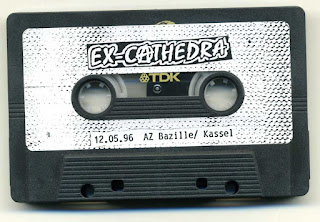 This is a split tape recorded live at their gig at AZbazille in Kassel(Germany)on 12/05/1996 and it was released by Zebra-Core,little label based in Duisburg(Germany).
Recording is pretty good considering that this was recorded live,there is no song titles in the cover sleeve.
For the lovers of  political ska punk this is a great tape.
Enjoy it.
This tape is not indexed
~f*a~r*a~w^a~y^
click me