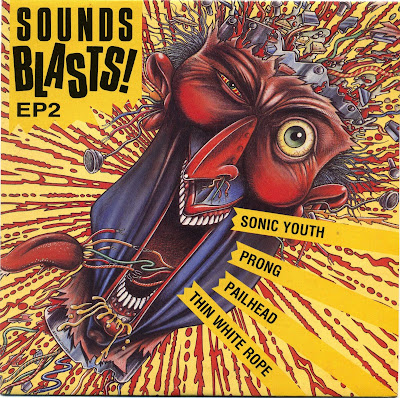 Second ep released by the famous British magazine Sounds in 1989.It includes 4 fantastic bands from the post-hardcore scene of that era.

Sounds was a UK weekly pop/rock music newspaper, published from 10 October 1970 to 6 April 1991. It was well known for giving away posters in the centre of the paper (initially black and white, but colour from late 1971) and later for covering heavy metal (especially the new wave of British heavy metal (NWOBHM))[1] and punk and Oi! music in its late 1970s–early 1980s heyday.One of the trinity of British music weeklies, along with NME and Melody Maker, Sounds folded in 1991 after the parent company, United Newspapers, sold all their music titles to EMAP Metro. Morgan-Grampian had been acquired by United Business Media – then known as United News and Media – in 1987, first as part of the United Advertising Publications (UAP) division and later as part of the then CMP Information portfolio. A legacy of Sounds was the creation of the heavy metal/rock magazine Kerrang!, which was originally issued as a supplement before being spun off as a separate publication. (from wikipedia)     click me