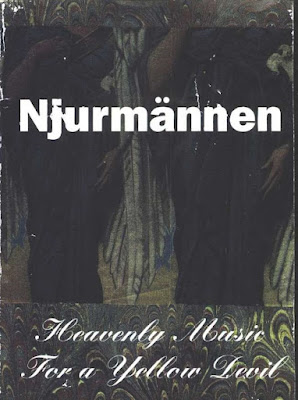 Njurmännen was a group from Sweden that released a lot off cassettes as well as singles and albums. Even a label was indirectly called up after them; Cold Meat Industry.

They started as band in September 1983. They was then; Magnus "AIR" Axelsson, Göransson (aka Shadow) and Johan "Mhugh" Linden. Shortly after they got Bosse "Bob Galban" Davidsen in the band. This line up did their first concert late 1983 or early 1984. Shortly after Galban quit. In easter 1984 the trio makes their first cassette (Hvem är Pavul?). While working on their second cassette album "Fejmert betong aktivator-reliker", they was expanded with Stefan Karlsson. With him they played some concerts. In January 85 both Mhugh and Karlsson quit. As a duo the rest off the band record "Masters 1992" in february 85.

During spring 1985 they became a trio including Peter "Linda Baby Doll" Andersson. As a trio they played their famous concert in Mjölby that later became (Njur 004). During summer 1985 they got Bobo Wieslander as livemixer and later studio producer. During fall 1985 Jonas Skoglund became their new bass player, after several persons had been in and out off the band. With him they recorded their marvelous album "CP" during the winter of 1986.

In August 1986 Skoglund quits and they continue as a trio. This line up make and preform a rock opera. First performence was in November 1986. Same month they recorded their first 7" "She's A Fucker". After 1987 i don`t know much. This is it; Doll quit after a while somewhere during the 90`s and the rest have recorded under the name Rotten Beak in a short period of time before they took back Njurmännen again. In 1997 they had a break, since then they have been back with two different line-ups.

(info from Paranoia Is Freedom blog) bandcamp  click me