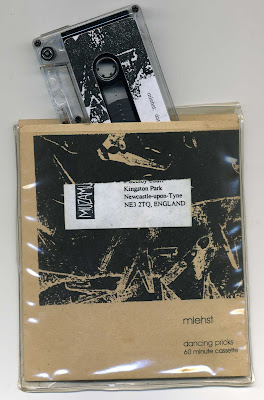 Mlehst is the English experimental noise project founded in 1991 by All Brentnall which released many cassettes and vinyls (often in small quantities) until the project started to wind down in the late 1990s. After the last releases came out in 2001 the project was essentially defunct. In 2005, however, Mlehst has restarted his activtities and continues to release new recordings.
This amazing project is already been covered in this blog when I posted the tape swollen inside a mouth
and the tape Jaundice In da Crevice Wagon .
A discogs page dedicated to him is here.
Muzamuza was an  English label started by Bigroadbreaker releasing experimental, ambient and industrial music. Active between 1995 and 2003. Recently restarted as MUZZeDIA VERHEAD releasing limited edition CDr's and lathe cut vinyl.
Enjoy it.
~f^a^r^a^w^a^y~
click me