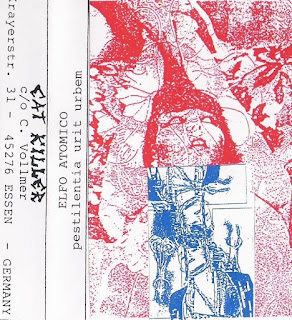 Another tape by the E.A. ghost collective,project covered in this blog quite few time now.I also already wrote about this german label  as I posted quite few tapes released by this amazing label managed by Carsten Vollmer.

Here I am re-posting the same info that I passed to Vita Ingnes Corpus lignum blog.
Enjoy it.
¬f*a~r*a~w¬a~y*
click me

"Carsten From Cat Killer released this tape-work in 1994. There were only 2 long tracks running pure noise death industrial. Only two people worked on this project. The art work on the cover was made by RAFF, and then re-elaborated by Carsten who printed a limited edition of 93 copies. Each came with a slightly different cover; depending on how he was cutting the two colour copies to set up the cover sleeve. For this project E.A. means Atomic Elf."

Track listing:
Sickness Side
A Untitled
Death Side
B Untitled
Posted by faraway at 16:30