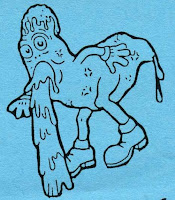 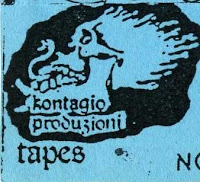 On the 27th of Sept 2017, I posted this great tape by this amazing band. One year later Jula Bell(the singer) got in touch with me, she kindly rectified some of the song titles and agreed to write some memories about this gig!
Here I am going to attach what Jula and Al Hansford(the guitarist) wrote about it: "It was 30 years ago, but here is what we remember about that day:  First off, we were the last minute add to the show.  I guess Andrea Rossini who was the sound man from Leoncavallo  (who was riding with us) must have talked to Luciano or someone over there and had us added last minute.  When we arrived it seemed like the Coliseum to us!  It was old and huge with giant dilapidated broken down walls.  I think that there 5000 or so people there for the festival, and it was a super fun night.  When we got there we met the Angelic Upstarts.  They were super nice, especially the bass player.  They were also super drunk and it was hard to understand them through their really thick cockney accents.   The bass player had to translate what some of the other guys were saying.  Since we had Dez Cadena from Black Flag in the band, we ended up throwing some Black Flag covers in with our set.  Al is pretty sure that he and Dez sang "White Riot" with the Angelic Upstarts. 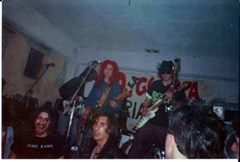 Al recalls that there were Italian Black Panthers there and recalls learning "By Any Means Necessary" in Italian.  He also recalls people giving free partial mohawks, and the touching the cold stone walls.  We stayed the night there and Al swears that he saw ghostly images marching up the corridor.  I guess that place is pretty haunted.   We had a wonderful time and Luciano and his friends were very fabulous hosts. " 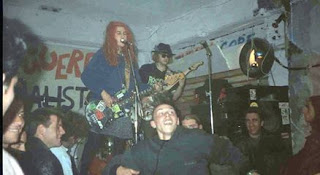 A FB page about Bulimia Banquet is here  , you`ll find their old flyers and an interesting video interview to Jula published on Women Of Rock Oral History where she talks about also her experiences in the L.A. Punk scene and Bulimia Banquet, of course.
Kontagio Produzioni Tapes was a small distro releasing mostly live tapes recorded in this massive squat(probably the biggest in Europe).
Forte Prenestino is, in fact, a fort squatted on the end of the 80s and still alive and kicking. 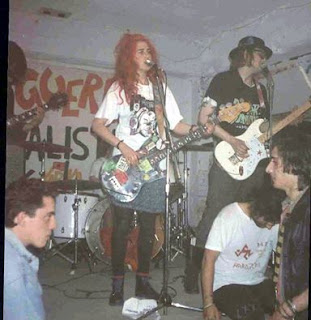 The pictures included here were taken at their gig at Diskarika Occupata in Foggia during the very same tour.
Big Thanx to Giuseppe M. for these pics.
Eventually, I also posted their 2 albums "Party My Colon(1989)" and "Eat Fats, Die Young(1988)", you find them here.
A very big THANX to Jula for her contribution, help and kindness.
Enjoy this great tape, amazing recording and now exact song titles.
~f:a)r~a*w~a*y~
click me