UIS is the music union and independent label from Russia. UIS produce non-commercial post-industrial compilations and spread audio cassettes and CDs on the streets, squares and other public places around the world. (intro from their Bandcamp page)

One of the headmasters of this great label is Al-Maytatu L-Habithu, I spoke about him when I posted the fantastic tape qamat-is-saatu-unpronounceable  and for this post,  He wrote a very good compendium about their work/projects including interesting links.
Big thanks to Al-Maytatu L-Habithu for his astonishing contribution.
Enjoy this amazing label.
~f(a*r)a~w*a)y~

Is art just entertainment nowadays? When professional artists are making money creating products for entertainment it is show business. What about these so-called experimental forms of art?


Modernists (experimental) art in XX-XXI centuries is “debatable” art. We have all this noise music, 4’33’’ performances, Malevich black square. It is like a question without answers. Can be noise music? What the difference between music and noise? Is silent is music? Is it Art? Modern experimental art generates these questions. All we have is endless discussions about the purpose of art. Art raises questions but does not answer. We can say that all this experimental art stands in a nihilist position.


Early art forms (an art of Pre-Modern) are not just about entertainment. Purpose of art was to capture and convey (express) the ideas, images, feelings, and knowledge as reliable as possible. Poets created ballads about past events like wars and coronations. Painters made frescoes in cathedrals as an illustration of the Bible. Musicians were inspired by religious plots, folklore, and literature.


I think it is important to save this traditionalists message in the experimental field. Instead of producing ‘experiment’ just for ‘experiment’, and ‘noise’ just for ‘noise’.

The term “information space” came to sociology and philosophy from technical disciplines.


Information space can’t be viewed as an interrelated and indivisible whole. We can still see the difference between cultural levels and national characteristics of each region. But we will come to united information space in the future where all national, religious and cultural differences will disappear. (Maybe not…) Any way we can mourn the first consequences of globalization.


So “united information space” is the result of globalization, computerization and modernization. It is a futuristic idea. 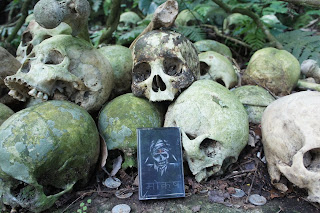 
Music is information. It provides the messages to attentive listeners. Will music transform into a cross-cultural form of art in upcoming united information space?


I think post-industrial music can be true alternative cross-cultural music, where spiritual aspects and ethnic music roots combine with high-tech innovations in sound. It is still true avant-garde modernists music – advanced guard of cross-cultural music of upcoming united information space. And we are proud to be a part of this movement.


The idea of UIS was born in summer 2009 and closely related with the activity of two Russian post-industrial projects [Qamat is-sa’atu] and Per Aspera.


Ixes (ex-member of [Qamat is-sa’atu], now in Per Aspera) dreamed to create brand new crossover post-industrial sound, which can be cross-cultural and based on a wide range of musical influences. He wanted to remove the stylistic limits and became free in musical expression.


His post-industrial project Per Aspera has its roots in so-called "schwarze szene" and rhythmic noise, but in fact, his music is a mix of different cultural influences. It is noted for high attention to rhythm, formalism, absurd and genre eclecticism that he calls UIS (United Information Space). His interpretation of the concept of "industrial music" is, first of all, freedom of choice for the realization of ideas. And this is the basic principle by which tracks were created.
The term UIS, which can be interpreted as United Information Space, means stylistic eclecticism and complete rejection of any genre limitations. Later, during the work with the project [Qamat is-sa atu], the term UIS acquired its second value is a non-commercial distribution of music in the different countries of the world.


Me (Al-Maytatu L-Habithu) and Ixes found UIS label in 2010. We start to produce compilations in cooperation with like-minded bands to express our ideas in information space.


/2010/ First release Geomatika [UIS-01] was a non-profit compilation which was attended by five post-industrial projects from Russia. The edition was a few numbers of CD-R. It was spread out in public places of Manila and Panglao island, Philippines.


/2013/ Abramacabra [UIS-02] was a non-profit tape release with single demo track. Per Aspera with the participation of [Qamat is-sa’atu] produced track dedicated to one of the most influential horror writer H.P.Lovecraft.


Unfortunately, we didn't finish the track in view of some problems, but anyway we published a number of demo tapes (about 15 cassettes) which were spread out in the streets of Providence, Rhode Island where Lovecraft lived and created his occult stories.


/2013/ Koi Pond [UIS-03] was created by six industrial projects from Russia and Belorussia for distribution over the capital of South Korea - Seoul.An edition was 50 copies single-side C90. Some audiocassettes were left in public places of this city at the end of November 2013.


/2014/ Jamia [UIS-04] became our first concept compilation. We made it spread out in Jamaica. Jamaica is best known for every music lover as the origin of reggae and dub. The compilation was created in reggae/dub tradition where original tracks were on A side of the tapes and their psychedelic (dub) mixes on side B. Edition was 50 audiocassettes C60 and about 10 copies CD-R. The part of the issue was spread out on the streets of Kingston, Montego Bay and in other cities of Jamaica.

/2014/ North Air [UIS-05] became the most integral in content and hard for distribution among all releases of UIS-community. Eight projects from Russia and Italy created dark ambient tracks, inspired by the literature of the Age of Discovery.An edition was 50 audiocassettes. Some part of the edition was left on islands of Polynesian state Samoa, where the famous writer Robert Louis Stevenson lived and worked. We dedicate this release to his immortal novel "Treasure Island".


/2014/ Grotesque [UIS-06] was conceived as eclectic and weird work. Compilation unites Russian and Belarusian artists of different music genres from post-industrial to experimental black metal. There were no specific idea or concept of this release. We just freaked out and had fun. The edition was 50 audiocassettes C90. Some tapes were left among the Gustov Vigeland's grotesque sculptures in Frogner Park in Oslo, Norway.


/2015/ मोक्ष [UIS - 07] became our masterpiece. Edition 50 tapes. It was prepared to spread out in the Balinese village Trunyan that is worldwide known for its traditional funeral rituals.


Mokṣa (Skt. मोक्ष) in Hinduism means ''breaking from chains of reincarnation and all the miseries of material existence''.


The 9 track cassette compilation is divided into 3 parts - 3 existential phases:


Side A. Phase of Life is about the the existence of a soul in the material world (tracks 1-3)


Side B. Phase of Death is about leaving of a soul from a body shell (tracks 4-6)


Side C. Phase of Eternity is about the astral journey of a soul (tracks 7-9) (non-physical phase is not available on physical release).

/2016/ Анатомический атлас [UIS - 08] was dedicated to the works of A. Vesalius, F. Ruysch, N. Tulp and to all progressive scientists, physicians and philosophers, who affected the development of medicine in Europe's Renaissance and the Age of Enlightenment. Edition 50 tapes. Part of  it was spread out in the streets of Eindhoven - one of the oldest cities in the Netherlands.


/2017/ Аргандаб [UIS-09] brought together twelve projects from Russia, Denmark and Italy. Each participant dedicated his track to the tragic events of 1979-1989 - the war in Afghanistan. Part of the edition of 75 tapes was spread out on the streets of Kabul in 2017.


/2018/ Ещё не время предавать [UIS-10] is about Islamic Revolution in Iran. Working with the historical background we tried to convey the feel and mood of Iranian society in 1978–1979. The compilation includes the work of nine musical projects from Russia, Germany and the UK. Edition 75 tapes. Audio cassettes were randomly circulated in Tehran and Bandar Abbas in January 2018.


Our next work will be released in summer of 2019 dedicated to 45th anniversary of Cyprus conflict. We will bring together excellent post-industrial acts from Russia, Italy, Greece and Turkey. Stay tuned for that!