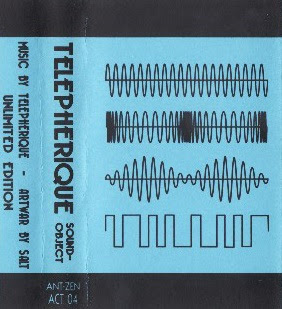 The project Telepherique began in 1989 with the intention to explore processes and working with people of different cultures. They started with mail-art projects, co-operation, and communication with people all over the world. Basically, Telepherique is Klaus, Danijela and Rene Jochim, from Würzburg, Germany, but there were others that became members of Telepherique, because of the massive collaborations and projects: Ulf Harr, Echart Seilacher, Harry Lüftl, Stefan Au, Stefan Alt and Karin... The name Telepherique is the French word for the funicular railway. This name was chosen because of the intention of gaining a view from a higher level.

Ant-Zen is deduced from "Anti Zensur" (= anti-censorship).
Ant-Zen is the most important label in the newer German Industrial scene. It started in the early 90s as a tape label that later also released vinyl and CDs. Mastermind S.Alt (Stefan Alt) also did most of the layouts and packaging of the releases. While the earlier releases are more into noise, the new output has a more technoid style that is still very experimental.
Ant-Zen was the German distributor of a lot of other labels and ran a small mailorder until 2019 when they discontinued putting out physical releases and switched to all-digital.
(info from Discogs)
click me