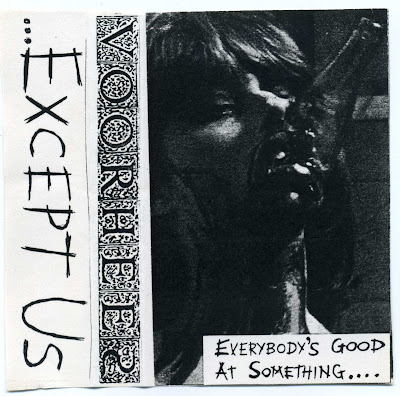 This cassette came out as totally diy tape.Recorded at Durham Street Studios, Hartlepool on the 9th and 10th of December 1991,limited edition of 50 copies-it was then re-released as flexi 7inch in 1994 by Armed With Anger: British hardcore label run by Richard Corbridge existing from 1992-2002.

Voorhees were a hardcore punk band formed in Durham City, U.K. In 1990, then in 1992 Ian Leck moved to Bradford and from the mid 90's every time a member left the band they were replaced by someone local to Bradford, essentially moving the band one member a time until they became a Bradford band. They finally broke up in 2001. There have been several reunions from 2004 onwards but no songs written since the 2001 breakup.(info from discogs).
Enjoy it.
~f*a¬r/a~w/a~y*
click me

Labels: 1991, demo, everybody is good as something...except us, hc punk, self released, uk, voorhees