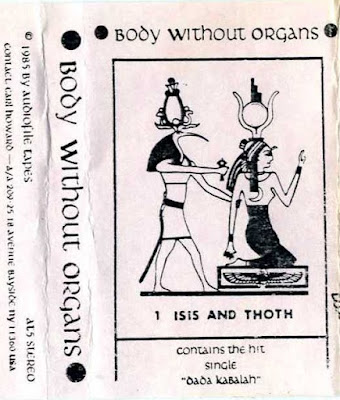 I passed this great tape to Vita Ignes Corpus Lignum blog 6 years ago!

I re-post it here including the very good review by Crepusculum!
Big thanx to him.Enjoy it.
^f~a^r~a^w~a^y~
click me
"When you will have made him a body without organs,
then you will have delivered him from all his automatic reactions
and restored him to his true freedom"

- excerpt from the radio play by Antonin Artaud: "To Have Done with the Judgment of God" (1947)

Body Without Organs appear to have been: Carl Howard [Nomuzic/ Audiofile Tapes], Amaury Perez [Amor Fati/ Will To Live], and Richard Behrens.. Thee sonorism they created for this cassette seems to pay homage to Isis: thee protectress ov thee dead whose mournfull tears for her husband/brother Osiris [thee god ov thee dead who was murdered by his brother Set] were said to flood thee Nile annually, and unto thee ibis or baboon headed Thoth: thee heart [intelligence] and tongue [voice] ov thee sun god Ra.. Their sonorism was a very unique creation steeped in many esoteric references which shall be attempted at being dealt with here..

She-Women of the SS - begins and continues through it's entirety with beauteous analog sequencing ala early Tangerine Dream which is met with recordings of accounts ov thee brutalising actions ov female SS officers towards prisoners of war during thee second world war..

I am in hell - begins with fast pulsating synthesis which pitches down in speed, and drops out momentarily to reappear with thee restrained elektronik thump ov a beat and sparse dissonant elektronik guitar.. all ov this tis amidst vocalisations calling out: "daddy.. who's calling me? it is my child.. i will come back, but i am not alive.. I am dead .. I am in hell, but i did not understand why.. when i found out it was too late.. my dearly friend one day you will see me again.. listen to me because it may be too late.. you will die like me.. i implore you to go back away from here.. please go back.." there follow strange samples ov a child's voice and barely decipherable speech sounding like radio transmissions from dead soldiers.. the piece continues for a total duration over ten minutes with thee looping phrases "we are not sure what is happening" and "I am in hell" to be met with sounds ov explosions and a fading away..

Alchemy II - follows in a similar instrumental form ov sonorously droning synth over which there is a minimal percussive sequencing and strange tremelo like undulations ov elektronikx with a very decayed and restrained feel about it ending with an ouroboros ov tailing delay..

the final piece of thee cassette tis: The Market, and it is composed ov danceable droning synth syncopated with sparse percussive accents, and tis layered through with undecipherable glitching vocal utterances and minimal synth lines.. towards the end much ov the sound begins to slow and decay with strange analog synth twittering and shifting until fading away..

Track listing:
a1- She-Women of the SS
a2- Vanishing Pentagram
a3- I am in hell
a4- Dada Kabalah
b1- Osiris Rises
b2- Alchemy I
b3- Alchemy II
b4- The Market