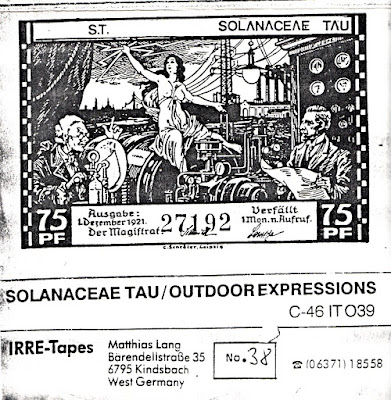 I already posted A Chemical In Debris and Transgerman Mind Configuration,both amazing tapes by this great anti-fascist electro project. I also already wrote about Irre Tapes German label run by Matthias Lang which evolved out of the IRRE Fanzine he published regularly during the early 1980's covering New Wave, Post Punk and the German Underground. In true DIY spirit he supported the international network of small labels and fanzines through editing the free IRRE Newsletter to spread infos and contacts and writing occasionally reviews for various publications.All of the releases where copied on demand and continously numbered but only a few had an explicit Limited Edition(info from discogs).
Enjoy it.
~f(a(r~a(w(a~y(
click me
Posted by faraway at 17:58