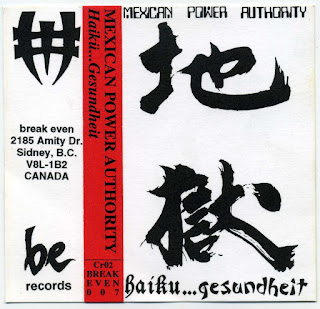 Here the legendary tape-work by the mighty Mexican Power Authority...a tape that blows away all the grindcore fans mixing weird passages of  jazzcore,hc punk,fast drums and speed guitar solos to arrive to a pure chaos of creativity with no musical borders.
Here a nice review by Short Fast + Loud zine:
"MPA remain one of the least understood and most underrated bands from the ‘90s underground. Their style was entirely unique, borrowing from hardcore and grind, yet adding so many off the wall elements that the end results never quite equated with their contemporaries. Imagine Muppets who studied free form jazz playing punk rock songs with the RUINS at a high school music recital with students playing recorders. Odd clarinet sounds and yipping vox offset the spastic punkiness that abounds. Kev from the almighty NEOS is in this band, but don’t go expecting straight forward thrash. Maybe someday MPA will get the recognition they deserve, but for now check out this cult favorite if you want something completely beyond the radar."
In September 2007, MPA regrouped after a decade hiatus and began rehearsing material spanning their original six-year existence to prepare for their first performances in ten years.
During 2008, the group focused exclusively on composing new material, with legendary local drummer Jon London completing the line-up in February 2009. The group will release a new LP in 2011.

A great tape issued with hand-numbered cover artwork and tape-labels.Inside the case embedded informations sheet. For all the lovers of certain crazy fast music with some weird genius hiding throu the musical notes/rhythms and the lyrics are funny too.
Enjoy it.
~f~a~r*a~w*a*y~
click me