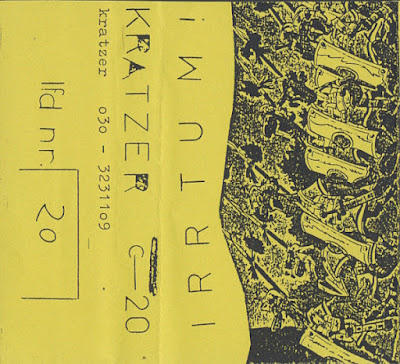 Irre Tapes is been covered in tusi blog many times now.run by Matthias Lang which evolved out of the IRRE Fanzine he published regularly during the early 1980s covering New Wave, Post Punk and the German Underground.
With his 3rd Tape Compilation Ein Herz In Not he started IRRE Tapes which was mainly active in the late 80s/early 90s and released material by the likes of Brume, Maeror Tri and City Of Worms and loads of lesser-known and stylistic different artists (Unpleasant Surprise, The Fuckedtones, Magic Moments At Twilight Time, Doc Wör Mirran) covering the whole range of the Independent Underground from Experimental Electronica to Guitar Pop.
In true DIY spirit, he supported the international network of small labels and fanzines through editing the free IRRE Newsletter to spread info and contacts and writing occasional reviews for various publications. Most of his Compilations should be seen as an attempt to promote lesser-known artists and labels. Without a doubt, he was one of the driving forces of the German Tape Scene.
He finally called the label days quits in 1994/1995 but soon re-appeared as collaborating and networking artist Mr. Moto (2).(from Discogs)click me