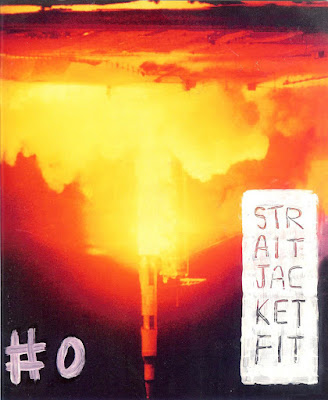 Straitjacket Fit is a Greek Hardcore/Punk band formed in 1999 in Patra, Greece.
They self-released their music and do gigs in squats and free places with no forced economic payback. They do not sell their music through the "music industry network" and do not play in clubs for money. They refuse to participate in the "music labels slavery trade".(from  Discogs)
I am lucky enough to know the singer of this band, in fact, I have already written about him when I posted the music by Grim Machine and Black Faun.
Straitjacket Fits play a form of very personal punk mixing various influences waved within great English lyrics.
Since I was very interested to know more about this amazing band, I asked Alex to answer a few questions, so you can read here a small yet interesting interview. #0 is their first album available on their Bandcamp Page as a free download just as all their other productions. A big thanx to Alex for passing me such a great band and for the relevant interview.(f*a¬r{a*w~a:y)

1000flights-When do you formed and how long have you been together?? 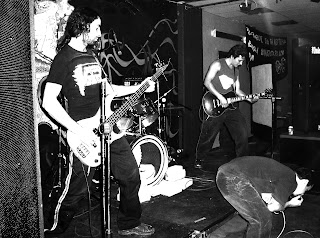 1. We formed at 1998, on the remains of a previous band we had, Alex (voice), my brother Dimitris (guitar) and Argyris (drums) playing post-punk/darkwave since 1995-6. It was called PICKMAN'S MODEL and unfortunately, there is only a cd recorded back then, not on the internet yet, but you can get an idea here
https://www.youtube.com/watch?v=NMNqfDKdUlk
Around 1998 came Yorgos "Pontikos" from THE DALTONS (hxc punk) and replaced our bass player, so we changed the name and became Straitjacket Fit, focusing on a more post-hardcore/experimental punk sound. We played at literally every squat/steki in Greece from 1998 to 2013 where we ended playing live shows and disbanded.
1000flights-Which one are the bands/artists that most influenced you?
S.F.: We were all avid music consumers(ha!) so the sound was a mix of what we listened to and everything else we thought would fit regardless of the style. Post-punk, anarcho-punk, hxc crust, post-metal, ska, jazz, apart from the big names such as Neurosis, Faith No  More, early Sonic Youth, Gang of Four, etc, it's useless to keep namedropping since we were very different in our tastes but very close in our purpose and vision. Let's just say, from Grind to Ambient and back, hehe!
Also lots of anarcho/DIY bands that toured around Greece and we played with, had been an influence in one way or another, such as the mighty JE M'EN FOUS from France/Switzerland.
We were  doing the original artwork for every release,(well, I was..) from the photos, collages, paintings to the final graphic design and packaging to distribution, a mix of art-loving provocation, Ad Busters magazine aesthetics, Dada collage, artists such as Yoshitomo Nara, stencil art and a healthy dose of dark humour or just dark.
1000flights: Were you active in Villa Amalias or any other squat in Athens??
S.F.: We played Villa Amalias the first time in 1999 I think, and then many many times followed. We consider ourselves, up to this time, a brother-band to the people that run the place, very close to us, and to bands that played there, ANATELLON TROMOS (Rising Terror), CHASMA, THE PARKINSONS, VALPOURGIA NYCHTA (Valpourgis Night), TIMETRAP and more that we felt we were doing something meaningful together at the time.
Right from the start, we took part in the first anarcho diy space"steki Sachtouri" kind-of-squat in Patras , from its beginning in 1998. We had our studio there and did a lot of gigs, as well as involved in the diy concert organising team "Porto Patrasso", at Parartima in Patras, a major anarcho-political concert place. Learning to record, sound engineering, set a gig or a recording session from scratch, it was all part of the game.
For me personally the Villa years, from the first gig up to its evacuation, was a period that had a great impact on me as a person and as an artist.
1000flights: How many gigs did you play? did you ever played outside Greece??
S.F.: We had played, I don't know, more than 50 less than a hundred gigs around Greece, squats, free spaces, open areas, public squares, only political DIY. We played in Liege in Belgium first time in 2002 if I am not mistaken since our bass player lived in Amsterdam for some time. We toured 2 weeks Holland-Germany-Belgium in 2008 with KILL THE CAT (ska-punk).
1000flights-The releases available on your Bandcamp page were printed as tapes/CDs or vinyl or were these released only as digital files??
S.F: All the releases on Bandcamp- except the last one "The End" which is a digital one- are on CD format. Also, the comps we have participated are CDs but not available now I guess. We consider releasing "The End" on vinyl by the end of the year, maybe early 2021..we'll see about that. 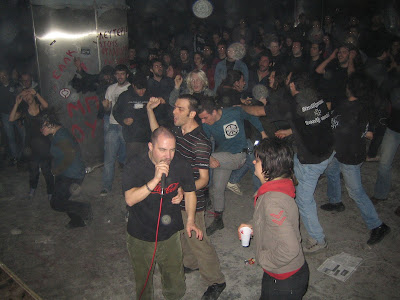 1000flights-Are the lyrics political orientated or what are the subjects in there??
S.F: The lyrics are totally political, dealing with two main concepts from personal to public, alienation and social revolution.
I will not repeat the too commonly used anti-nazi, anti-species, anti-capitalist, anti-whatever the slogan, we were all that, since contributing to the whole DIY ethos-self organization and keeping a strong stance as a band from the beginning to the end. We felt that a more personal way of writing about these themes was the best to express ourselves artistically and not losing the target. So the lyrics are a bit more surreal and existential than straight forward, but still political and direct on their message. Yet not preaching but questioning and inspiring, I suppose.
1000flights-After that the band disbanded, you Alex started a few industrial/noise orientated projects (Grim Machine, Black Faun, The Zyklons)...would you like to say what inspired you to start such projects ??
Is any other members of the band at the moment active in other music/artistic projects/bands?? If so, which ones??
S.F.: While being at Straitjacket Fit, I started a duo of experimental/playful noise called Black Faun with my crazy friend Charis (hELLaSH), around 2007. Since then we do live acts and we have 4 releases. It all started as a parallel project to Straitjacket Fit, so as to express a different point of view soundwise and artistically speaking. It was the first vehicle for me to play free improvisation and noise music.
In 2013, in the middle of the financial crisis in Athens, I started Grim Machine, my personal project, because I wanted to try playing on my own after the band disbanded, and also to express my personal emotions about the political situation we were living at. It started as an industrial/harsh noise project and now it has evolved into more ritual noise/free impro territory.
Around 2016-7 I met Perseas Rizos, a poet, visual artist and sax player, and since then we are playing together as the free form/exp.jazz duo The Zyklons.
I consider it as an evolution in my playing and interacting in terms of improvisation.
After Straitjacket disbanded, me and Yorgos played together at the band SARKA STO ZWO (post hxc) for 3 years and after that we recruited with Argyris in HAUTE TANZ (post-punk/noise rock). Argyris also plays in a punk band and Yorgos never stops practising! Regarding the Straitjacket Fit members, the important thing is that we are friends first and foremost, so we will never stop playing music together one way or another. 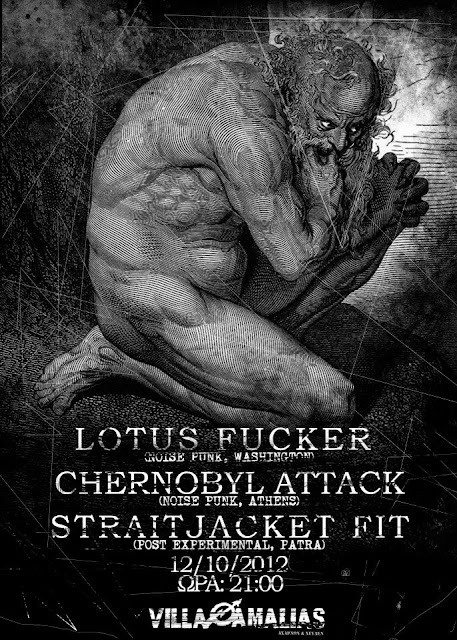