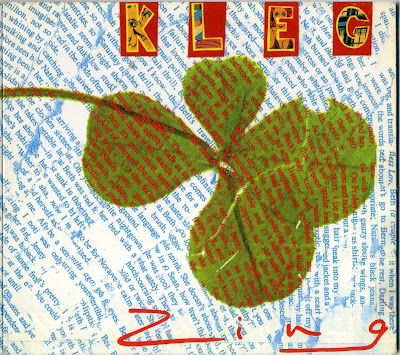 Recorded at Studio 20 (Tienen, Belgium) at August 19th & 20th and September 2nd till 4th 1991. Issued in a 4-panel Digipak with white tray, manufactured by Van de Steeg, Holland under license from AGI, USA.
Some copies with a sticker on front: "Produced by Lee Ranaldo (Sonic Youth) / mixed by Luc Van Acker (Revolting Cocks)"
All the info is taken from Discogs.
To complete this post I am here attaching a great video with a track from this album, here the info from that Youtube Channel:
"A video for the song Diamanda by KLEG. (Yes, this is the stereo version) Diamanda was a track from KLEG's second album ZING, which was recorded in aug./sept. 1992 in Studio 20 in Tienen (Belgium) by Luc van Acker (engineering) and Lee Ranaldo (production). The video was made in the winter of 1993 by VPRO TV for their show TV Nomaden, a weekly experimental show that was on Dutch national TV between 1992 and 1995. The video was filmed in KLEG's hometown Groningen, but I can not recall where that nomad`s land was. In fact, I only remember it was a fuckin' cold afternoon! Diamanda was named after Diamanda LaBerge Dramm who was born in the month we wrote that track. This Diamanda LaBerge Dramm: http://youtu.be/NcF7VwpKhEA More vintage music by KLEG at https://kleg.bandcamp.com/ https://soundcloud.com/kleg"
Enjoy this great album.
*f^a~r:a}w>a<y*click me