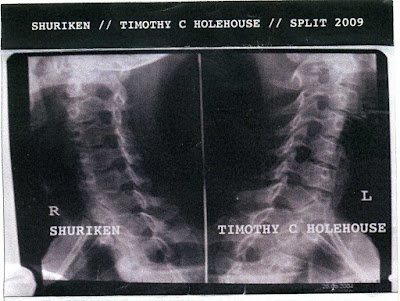 Shuriken is a Dutch band playing a kind of indie rock with some noisy influences and obsessive structures,.They seem to be still active and their FB page is here.

Timothy C Holehouse is a British musician from Dorset, in this tape he offers to us 2 pieces of drone noise industrial.
TCH (AKA Timothy C Holehouse)
is the alter ego of Tim Holehouse the folk/ blues musician; this is his more leftfield material ranging from noise collages to ambient guitar soundtracks. In mid-2007 Tim Holehouse decided that his two styles of writing were falling into two very separate camps of music and decided to split himself up…Thus Timothy C Holehouse was born!  (although the first album was recorded new years eve to New years day 2006/2007) The name was later shortened to TCH.
This Project will CEASE TO EXIST on 31st December 2014. Records will still be available, but no further live performances or recordings will be made by TCH (timothy c Holehouse).

Info is taken from his official webpage while his Bandcamp page is here.
Enjoy it.
~f*a~r*a)w~a)y~
click me

Preprinted cassette in a plastic case with a J-card insert.