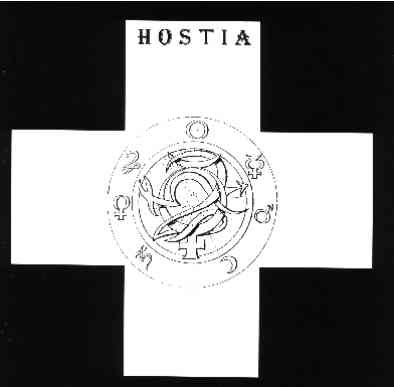 Hostia was one of the numerous projects by the German artist Paul Hostia. He also had other projects: Delysid, DLS, Helix 12, Moksha, Ordo Catharis Templi, Zoomorph.

With this album, Hostia delivers to us 4 tracks of powerful dark ambient including choirs, cavernous vocals, bizarre synth modulations, venomous pulsating drones, trumpets with a background of devilish and evocative sounds.
This is the lp version released on Dark Vinyl Records of the tape Alles Ist Eins which was originally released on cassette on the label O.C.T. in 1992. The vinyl had a print run of 449 copies.

Dark Vinyl Records is a veteran German label specialized in industrial, dark ambient and experimental music.
It is still active and you can check their webpage here.
Enjoy it.
~f:a(r~a:w}a~y:
click me