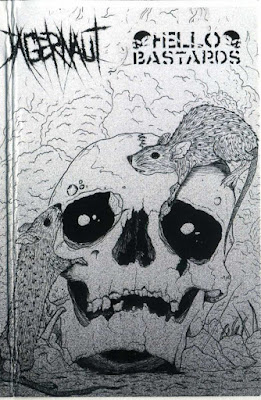 Amazing split tape by these two HC Punk bands-Jagernauts: DIY hardcore/punk/grind band from Athens, Greece, formed in 2010 and Hello Bastards: vegan/straight edge collective from around the world who have been based in London for many years.

The folded cover sleeve reports lyrics and info.
These are the webpages by Hello Bastards:hellobastards.co.uk, Facebook, Bandcamp, hellobastards.bigcartel.com
And these the ones by Jagernaut:jagernaut.wordpress.com, Facebook, Bandcamp.
This tapes was co-released by 4 labels  Scull Crasher Records, Alcoholic Desaster, Noise Attack, Severed In Seconds.

Split release on green, pro-pressed-tapes. Cover folds out and includes lyrics, made by Jerboa Illustrations.

This edition is limited to 200 copies only, with only 50 distributed in the UK through Severed In Seconds Records. The cassette also comes in three other colours: black, white and transparent.

Hello Bastard side includes some 'unreleased' or 'compilation only' tracks taken from previous recording sessions.
Enjoy it.
~f(a*r)a_w^a)y:
click me