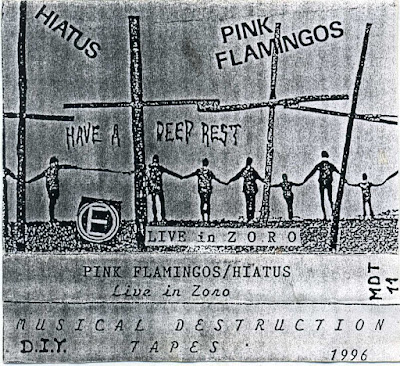 Live Split tape with two legendary punk bands: Pink Flamingos and Hiatus.
Pink Flamingos was a Fast Hardcore band from Berlin. After their break up some members continued in the band Stalker (21.
Hiatus was a seminal crust punk band formed in Liege(Belgium)in 1989 and active till 1996.

Two separate gigs at the famous squat Zoro in Leipzig (Germany), Pink Flamingos on the 18/11/1995 and Hiatus on the 21/03/1996.
Both recordings are pretty good and the cover sleeve reports addresses, info and song titles.
A nice live tape from the crypt of the 90s.
Enjoy it.
:f(a*r^a~w:a_y~
click me
Posted by faraway at 12:04