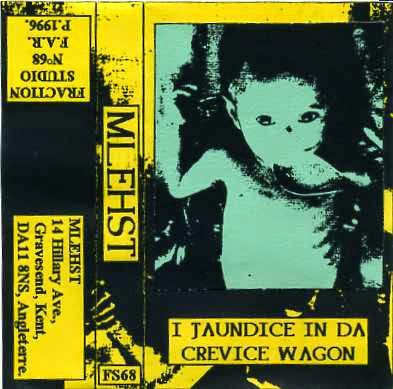 English experimental noise project founded in 1991 by All Brentnall which released many cassettes and vinyls (often in small quantities) until the project started to wind down in the late 1990s.
After the last releases came out in 2001 the project was essentially defunct. In 2005, however, Mlehst was restarted and continues to release new recordings.Actual webpage:freewebs.com.(from discogs)
I already wrote about this label,in fact Fraction Studio is a French experimental cassette label from the 1980s run by Michel Madrange aka
M. Nomized.
Enjoy it.
~f~a~r*a*w~a~y*
click me
tracklist:
credits  notes
Final production March 1996 using unreleased, rare, deleted and available material from 1994 to 1996. Mlehst sounds recorded using microphones, effects, radio, guitars, electronics.
All j-cards have the same artwork, although some are in colour and others are black & white.
Posted by faraway at 18:22