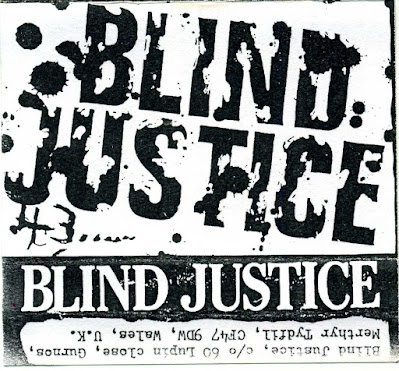 Blind Justice formed in 1988 as Gus, vocals; Grant, guitars; Gavin, drums; and Jolly, bass. Immediately the band began writing their own material, together with a handful of cover versions (mostly from the Ramones).

The band played a few gigs and recorded their first demo tape titled Rock'n'Roll Vermin with its original line up. Jolly parted company in 1989, joining fellow Merthyr punk band Foreign Legion. Wolfie joined on bass for a while but was replaced by ex-Foreign Legion bassist Eggy for the band's second recording session in 1990, collectively titled Into The 90s. This line-up was stable for the duration of the band's lifespan, until sometime in 1994 when the band ceased.

There was also a 7" and an album planned with Full Circle Records (which was announced in Maximum Rock'N'Roll through an interview with Full Circle's Andy Turner). Unluckily for Blind Justice Full Circle soon closed down. A couple of other small independent record labels were also in discussion with the band at this time but these didn't progress further. This was the beginning of the end for the band. Gus had also just started college in England, making rehearsals almost impossible.

Following the first cassette Rock 'n' Roll Vermin with Jolly on bass, Blind Justice recorded five further sessions, with Eggy on bass. The first was the Into The 90s cassette, the next two in 1991 combined to make the Self Injustice cassette. Another recording in 1993 made the cassette titled 43 and a final one song demo, which would help to make up the Blind Justice cassette on Poland's Demonstracja Tapes.

Blind Justice played gigs across Wales and England, with a short mini Irish tour (with Northern Irish band Alumni Feedback) in 1992. The band supported bands including UK Subs, Joyce McKinney Experience, The Abs, Thatcher On Acid, Wat Tyler, Cowboy Killers and many others, together with the band's own headline shows.

There were numerous compilation tapes, fanzine articles and interviews with or about Blind Justice, together with independent distributors, spreading the music and name, from across the world (predominantly Europe, with some in USA, South Africa and other places too) including: Suspect Device (UK), Vision On (UK), Pogo Post (Germany), Zips and Chains (Italy/Yugoslavia), Puke (South Africa), Crude (USA), Crud (UK), Little Green Man Music (UK), No Man's Land (France) plus many more.

All the recordings were demo tapes, rather than highly polished official releases, which perhaps catches the band's live sound better than spending months in the studio: The total hours spent in a studio recording and mixing would add up to about a week (17 songs). (from their official webpage)

I have posted already their Demo Tape n3 released in 1991.To complete this post I am adding their only official video of the track "X Ray Vision", and I left these tracks as waves. Enjoy it.