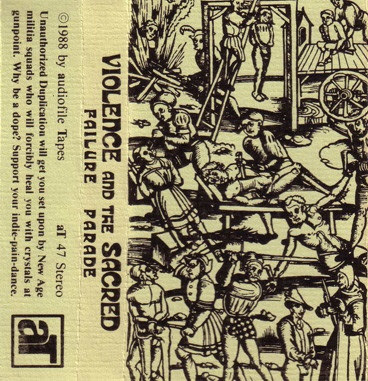 Violence and the Sacred has been recording and performing electronic / experimental music since 1985. Styles range from noise, ambient / drone, pure electronic composition, improvised cacophony.
Recent releases include Dawning Luminosity (2010) and You are planning to enjoy the apocalypse (2009), as a well as a 5-CDR set of older, anarchic, improvised live recordings from 1986-1987.(from their bandcamp page, where you`ll find more amazing productions to download)

The legendary New York industrial/experimental/electronic label audiofile Tapes was run by Carl Howard and active since the mid-1980s.I  wrote about him quite a few time now.Here an interview  to him on Autoreverse Independent Music Magazine and another one on Media Hyperrel.org.

This tape was reprinted as CDr by the Canadian label Vats in 2011.Label associated with the band.