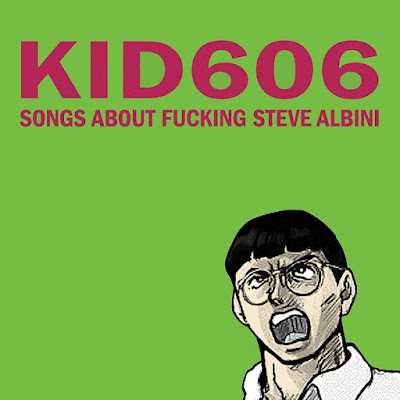 Miguel Trost De Pedro (born July 27, 1979), better known by his stage name Kid606, is an electronic musician who was raised in San Diego and later moved to San Francisco. He is most closely associated with the glitch, IDM, hardcore techno, and breakcore scenes.

Kid606's music is similar to the work of his friend and colleague Lesser, as well as hardcore and IDM acts such as Atari Teenage Riot, Autechre, Mr. Oizo, and Matmos. He is primarily inspired not by his electronic contemporaries, but by his love of the industrial music, death metal, and industrial metal of the 1980s and 1990s, particularly bands like Godflesh and Napalm Death.[1] His music is known for its high tempo breakbeats and liberal use of noise and sampling, as well as its punk aesthetic, uninhibited genre-mixing, and irreverent sense of humor. However, he is equally adept at creating more serious tracks that often reside in the realm of ambient and glitch ("Parenthood" from Kill Sound Before Sound Kills You and the entirety of P.S. I Love You being good examples).

In 2005, he put together a band with a drummer and guitarist called Kid606 and Friends.(from Wikipedia)

All songs on this album were created with analog source material (analog synths, AM/FM radio, microphone) then processed on a computer, then mixed and mastered to two-track analog tape.

The album cover and title are both a reference to Big Black's album Songs About Fucking, of which Steve Albini was lead singer and guitarist. Also, all of the track titles are anagrams of "Miguel De Pedro", Kid606's real name.

Issued in a clear tray digipak style cover.
The shrink wrap has a sticker on the front.(from Discogs)  click me