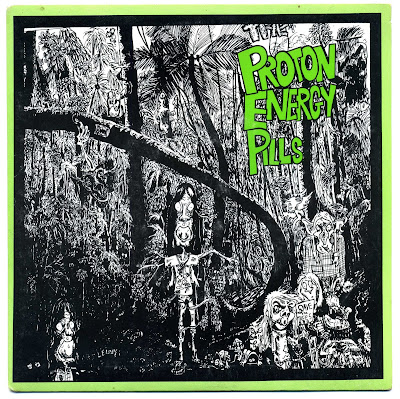 The Proton Energy Pills were a hi-energy Australian band from Wollongong-via-Detroit that muscled their way into the thriving Sydney scene in the late '80s, an hour's drive to their north - and fell apart soon after. Two singles and a mini-LP are the physical legacy from a couple of years hard work, but the band members went on to form or play with (Tumbleweed, Brother Brick, Asteroid B-612, The Yes-Men).
The Waterfront Records label was started in 1982 by Steven Stavrakis while he was working at Phantom Records. It's first release was JFK and The Cuban Crisis "Careless Talk Costs Lives" EP.
In 1985 Stavrakis and Phantom co-worker Frank Cotterell opened the Waterfront shop in York Street Sydney. Later joined by Chris Dunn (another ex-Phantom colleague) the store move to Sydney's Haymarket and eventually back to York street where the dream ended.
The name Waterfront was appropriated by MGM Distribution who released a number of records utilising the name Waterfront. This was done without the knowledge of the "real Waterfront" label owner (Stavrakis, or his partner Dunn).[info from Discogs]
waterfrontrecords.com, Wikipedia, click me
Posted by faraway at 12:33