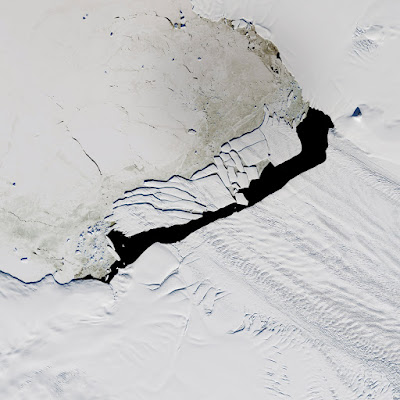 Pine Island Under the Midnight Sun was influenced by a large glacial calving in the West Antarctic Sea and how it was captured by the Operational Land Imager on Landsat 8.
Credits: NASA Earth Observatory/USGS
Cover Photo, 19 December 2017
Recorded May to July 2018, Athens
Live Mix/Recording by d E
Mastering at Sweetspot Studios
Special Thanks Alexandra, Alexandros, Iason, Ion, Kostas, Lydia, Stathis
Released by
RU.MO.RE (ectrecs@gmail.com)
1000+1 Tilt (tiltrecordings@gmail.com)
released November 6, 2018
d E =Soundscapes, drones and noises as these are perceived synaesthetically. Inspired by techniques like automatic writing, all the tracks are live mixed and recorded as one-shot meditations, aiming to capture the feeling and the entropy of the moment intact.
click me
Posted by faraway at 15:51