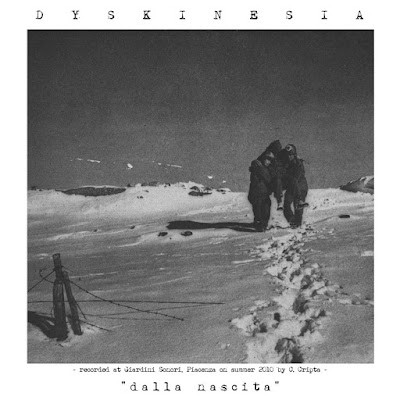 DYSKINESIA is an italian band focused on music experimentation. Since the beginning (late 2006) the band (2 guitars, drums) began to perform with a simple approach, focusing on sound and improvisation. The musical outcome was a very raw mixture of stoner/psychedelic genres (see “Live in Pripyat” – Varjot Prod. – 2007). In early 2008 the band grows (5 people), taking a more stretched out approach, exploiting the presence of vocals (very weird vocals made with delay and other machines) and bass guitar (also a very deep noise monster). Through the years, the band style embraced anoise/drone approach, with neverending repetitions and oppressive atmosphere. The first full lenght (self titled “Dyskinesia” – Frohike – Creative Field Rec. – Cold Current Prod. – 2008) is a proof of this shifting.
2010 has benn a very prolific period. The guys recorded a couple of split albums, with other great italian drone/ambient projects like “Corpoparassita” and “Gioventù Suicida Studentesca”, and prepared their second full lenght "Dalla Nascita". These last three recordings, have been made with the collaboration of the sound master Camelio Cripta.(from Discogs)

This album was released by the Italian label Frohike Recs in 2012 and then re-released on cassette by the British label Cruel Nature Records in 2014.