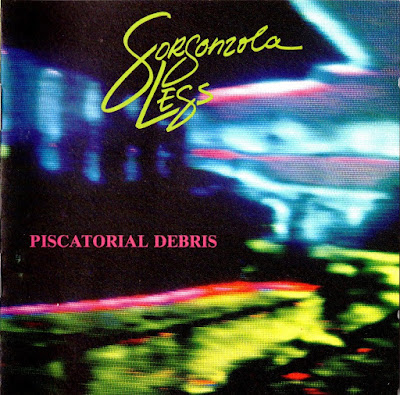 An astonishing CD by Gorgonzola Legs, for whom not familiar with them then I already posted their great tape Salmon Squeezing In Weird Weirs in that post you`ll find some very useful info about this project.

This cd is yet another great gift by my friend Dante who kindly sent me this as Flac files and suggested to me to add an inspiring quote by  Hessel Veldman (one of the founding members) taken from the booklet of this cd.
My gratitude to you, dear Dante.
EXART (label, studio and archive) was founded by Hessel Veldman and Nick Nicole (2) in October 1982. In 1978 Hessel had started composing experimental music and before 1978 he was playing the guitar in several local blues- and rock bands. The label wanted to spread new experimental and improvised music. The studio was the place to improvise, compose, record and make radio-programmes, mixes and remixes. At the same time, Veldman started to preserve sounds in the Exart archive. The label ended its activities in 1995, although there are rumours that Veldman has plans to do digitalized reissues of some of the releases.
Variations on the label name (Exart Cassettes, Exart K7) are used on some of the releases.
(from dijima blog) 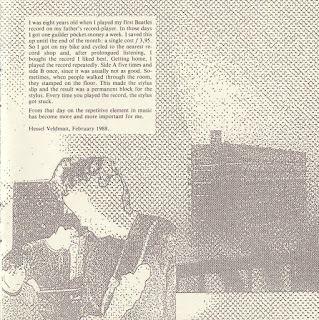 To complete this post I am also adding a review originally published on Soft Wath magazine and then re-published on a Discogs page dedicated to this album.
Enjoy it.
_f:a(r*a~w)a_y~
click me
This is an album which undoubtedly falls into the category of Jazz, albeit at it’s most loose & unstructured. “Piscatorial Debris” comprises two rather long tracks - entitled parts 1 & 2, but the sound changes so much that there could be more than a dozen tracks in here.
“Piscatorial Debris Part One” gradually fades in on calming sounds with some RESIDENTS-like odd voices speaking in strained tongues in the background. This gradually builds into a very subtle and understated rhythm over which percussion cuts and hacks as if some vandal were defacing some grand work of Art with a severely blunted knife. The sound metamorphosizes, only the two-note bass sound maintaining the pretence of rhythm as electronic soup and harnessed feedback build up and fade away, creating an ever-changing shape-shifter of noise. Sax appears, twisting it’s serpent way through to the front of the sound, almost obliterating the drifting mist of sound which skulks along in the distance. Eventually, the sax fades out and the grey Industrial morass folds back towards the front of the mix. About 16 minutes into the track grating electronic sounds like honed blades breakthrough before the noise sets off in a sort of TG ‘rising from the ashes’ type thing with another understated rhythm over which the sax swoops and ascends. It finishes on such a promising note, you feel you have been cruelly robbed.

Opening on a pattering handclap rhythm and ear-scraping saxophone, this soon collapses into understated non-rhythm reminding me a little of CLOCK DVA’s earlier work - the two tape albums. This fades almost to silence, saved only by well-controlled feedback and tinny piano before a thick black cloud of noise drift into the arena, distorted and impenetrable. This forms into a sort of non-rhythm reminiscent of LEWIS & GILBERT’s more drifting music. This in its turn yields to a rippling harp / quiet sax piece which would be quite beautiful if not for the grating, squeaking sound in the background. This fades into the next part again with bassy sounds providing understated rhythm while the vocalist sings in a non-language again, his voice doubled - one bassy, one higher-pitched, both used more as subtle instruments than as actual vocals. This again changes it's sound still without apparent structure, with noises like metal claws slashing the inner synapses, charging, transmuting, yet despite it’s apparent lack of control, they still seem to be keeping a calm hand at the reins. It forms into a much more controlled piece by the time it fades away.

I admit I wasn’t too impressed the first time I heard it - I listened ‘with one ear’ and had formed an impression that they were okay but... Now, after reviewing it - listening to it at a more intense level, I’m willing to say they qualify for the non-existant SOFT WATCH top ten recordings. It’s a great little disc - one I’ll play again & again. If THROBBING GRISTLE had chosen a less stark image, and a couple of them had a Jazz background, it’s conceivable that they would have sounded like GORGONZOLA LEGS. If you like the "TGCD", then chances are you might like this - there are a lot of similarities.