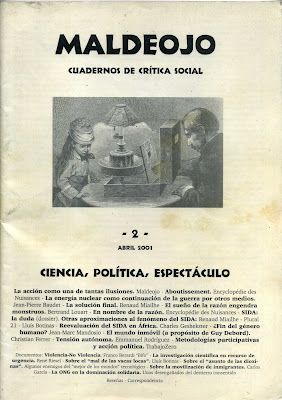 A  big magazine with in-depth and long articles about situationism, social critics and philosophy. Some articles are translated from the French originals, some others are in their mother tongue.

I have found some info about this very interesting magazine on the blog Industrias Mikuerpos the article there is very well done and long but only in the Spanish language. I thought to translate into English the very introduction in order to give you some basic info so you get an idea about it.
A big thanx to my friend Miguel Lorca for gifting me this amazing magazine around 15 years ago and for kindly translating this introduction just a few days ago.
Enjoy it if you are Spanish literate.
:f(a^r:a_w>a(y>
click me

The short-lived existence of Maldeojo as a collective of criticism and social action is largely due to the fact that it really wasn´t about a constituted collective on previously established patterns, but about a “circle” of discussion on common topics that aimed to relaunch critical theory on the basis of the rereading and upgrading of situationists legacy. The group began to take shape during a meeting on reading and discussion of Debord´s “The Society of the Spectacle” promoted by several Madrilenian fanzines at Aurora Intermitente foundation in 1999. During the year 2000 two issues of magazine Maldeojo. Cuadernos de crítica y acción social were published, they were oriented towards the critique of technological domination in a spectacular tone and quite influenced by French critical currents in the wave of Encyclopédie des Nuisances. Following text was published on Zehar magazine 47-48, monographic issue “thinking the edition” (Gipuzkoa, Arteleku, 2002)
Posted by faraway at 23:34