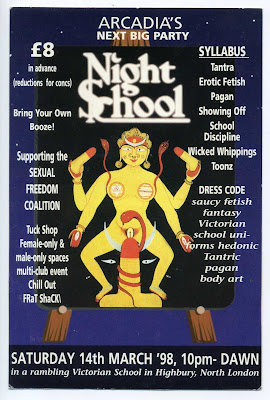 Here two flyers of the mighty Arcadia Parties held in 1998 and 1999. Arcadia was a very special fetish party supporting the Sexual Freedom Coalition.
I spoke about this organization already 2 times when I posted  Their annual Report 96/97 and Book Of Delights the booklet they were giving away at the people taking part in their Sex Maniac Ball in 2003.
Fot whoever missed these posts then: 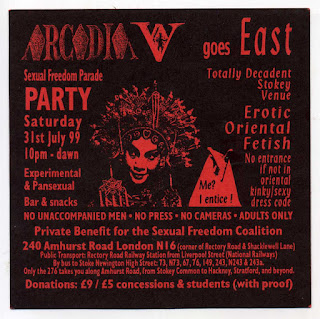 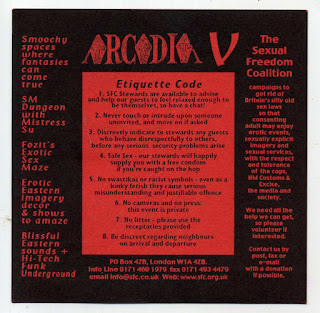 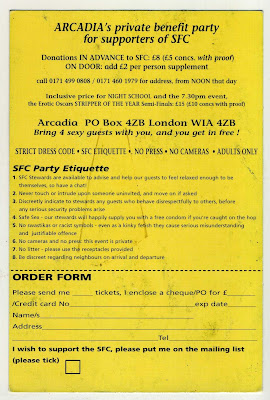 The Sexual Freedom Coalition (SFC) is a pro-sex campaign organization and political pressure group based in the United Kingdom that challenges the laws which take away the sexual freedoms of consenting adults and also challenges the media and official bodies that show disrespect for sex.
The Sexual Freedom Coalition is a national UK voluntary organization whose aim is to campaign for sensible reform of Britain's antiquated and repressive laws concerning consensual sexual practice between consenting adults and ensure no new laws creep in to prevent consenting adults enjoying sexual freedom.
The Sexual Freedom Coalition was formed in April 1996 by a group of people who decided that sex clubs such as Whiplash should not be raided and the 10th Sex Maniac's Charity Ball should not have been stopped by the police, putting its charity at financial risk.
A march was organized starting in Soho and ending at 10 Downing Street where a petition "Sex Please We're British" was presented to the Prime Minister.
Since then, there have been many triumphs and the phrase "the sexual freedom of consenting adults" has become commonly used. The SFC is consulted by the Home Office and the press and is unique in the world. They have joined together with Outsiders and the Erotic Awards to hold conferences and events to allow campaigners to network and work together.
They are a member of Backlash, which was formed in 2005 in order to oppose a new law criminalizing possession of "extreme pornography". (from Wikipedia)
Here their webpage:official webpage sexual freedom coalition.
Posted by faraway at 19:17