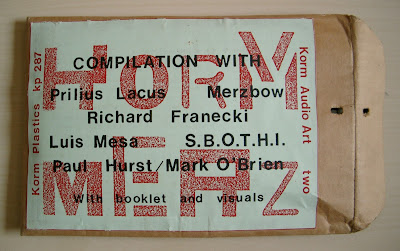 Legendary Dutch Label Korm Plastics released this tape as an hommage to Kurt Schwitters in a limited edition of 100 copies only, numbered from 1887 to 1987.

The tape comes in a cardboard envelope with booklet and inserts. Very good artists and graphic works in this c60 sampler, all the artworks provided in this folder.It was reprinted as Cdr is 1999.
About this amazing label here a short introduction taken from their official webpage.
Enjoy it.
~f*a^r~a^w*a~y)
click me

"Korm Plastics is not really a new label; in fact, it's quite ancient... Korm Plastics started life in 1984 as a cassette-label. In 1992 Korm Plastics released its first compact disc and quickly after that, Korm Plastics became linked with Staalplaat records. Until early 2003 Korm Plastics was part of Staalplaat in various guises and various projects — read more about this in the 'history' part of this website. 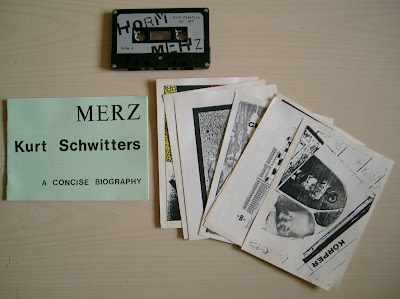 As my desire to release music I personally care for became stronger and stronger, I decided in early 2003 that it was time to stand on my own two feet. Korm Plastics goes underground again. I am no longer interested in being a real businessman. There is no schedule, no plan — just ideas and desires. Please do not send me demos of your music — I simply don't have the money nor the time to work on them. I only wish to work with people who I know personally and whose work I like.
The major project is going to be a series of re-issues from The Hafler Trio. All works that are long unavailable.Besides it, I, release music that I like. Simple as that."
Posted by faraway at 14:25