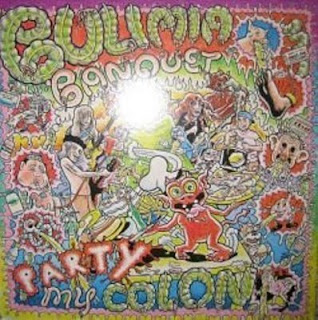 Bulimia Banquet was a very unique alternative punk band from Los Angeles and the South Bay of California, USA, who formed in 1985 and consisted of Ingrid Baumgart, Al Hansford Jula Bell, and Jason Greenwood. Dez Cadena, Mia Ferraro, Travis Johnson, Greg Cameron, and Nick Passiglia were also in the band for a period of time. The band put out two albums with Flipside: Eat Fats Die Young and Party my Colon. They put out a single of Curse Me/Replete with Piece of Mind Records and were on numerous comps including flipside vinyl fanzines, and 2 Triple X comps. One was Welcome to Our Nightmare, and the other was the Triple X comp Gabba Gabba Hey. The band was featured in Lisa Rose Apramian's riot grrl documentary, Not Bad for a Girl and as well as a Larry Wessel documentary on underground Los Angeles. They toured the U.S. and Europe as well as Canada and parts of Mexico. They also put out two videos: Curse me and Dine or Die.(from ReverbNation).
I have posted a live tape with a  good recording by this great band, you`ll find it here.
and also their first album Eat Fats, Die Young.
To finish this post I am attaching one video from their reunion in 2011.
Enjoy it.
~f(a*r~a{w)a_y~
click me
Posted by faraway at 17:00