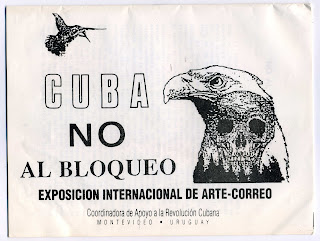 International mail art project launched by the mail artist Clemente Padin,I spoke about him when I posted his other mail art project No Mas Excusas.
A small biography taken by Wordpress.
"Clemente Padín was born in Lascano, Uruguay in 1939. He is a poet, performer, designer, video- and multimedia-artist, and art critic. He studied Spanish Literature at the University of the Republic of Uruguay. In 1967 he made first experiences in the field of Mail Art, exchanging publications with Edgardo Antonio Vigo, Guillermo Deisler and Dámaso Ogaz. In 1969 he published the magazine “OVUM” as well as postcards and visual poems. During the Military Dictatorship in Uruguay he organised the first Latin-American Mail Art exhibition in 1974 at Gallery U in Montevideo. With his fake postal stamps he doomed the dictatorial regime for its brutal suppression of human rights. This might have lead to his imprisonment from August 1977 to Novembre 1979. Mail Artists from all around the world protested against it.
In October 1983 he showed the public his artistic activities in the exhibitions “1. Mai” in Uruguay. After that he organised the Latin-American and Caribian union of Mail Artists, founded August 31, 1984 in Rosario, Argentina. Since then Padín has been participating in hundreds of Mail Art exhibitions worldwide. 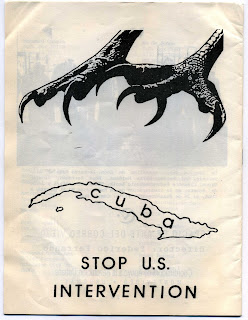 “Mail Art is not made for the art marked, it is there to be consumed and communicated. It is impossible to reduce the artistic to political or social interests. The political content of art is inseperably bound to the artistic content. Mail Art shows itself as a form of social consciousness.” Clemente Padín (translation by MAI)"
You can read a very interesting interview to this artist on Iuoma.org

In this documentation you`ll find an article(english and spanish)about the blockage in Cuba and some artworks about the subject.
Enjoy it.
^f>a<r>a<w*a~y>
click me
Posted by faraway at 10:46