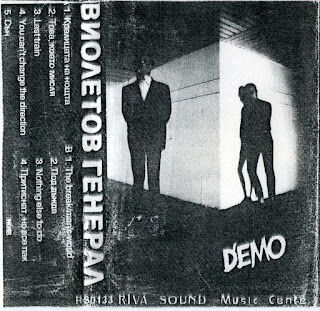 "The band Violetov General (Виолетов Генерал) was a Bulgarian post-punk
band formed in 1989 by Emil Valev and was active until 1994. The band
went through new wave , dark wave and punk, influenced by swiss
avante-garde players like Jorg Lenzlinger and Pedro Kobler. They later
incorporated industrial and more experimental sounds into their music.
After their second concert the only member that remained in the band
was the bass player - Evgenii Genchev.
The band has many unofficial releases and bootlegs, but official albums are:
"Dvoinik"/Doppelganger,
"D'Emo"
"Razkazi Za Sofia" (with Rivasound)"info taken from LastFm.
A discogs page dedicated to them is here.

Big thanx to Al-Maytatu L-Habithu for providing the english translations of the songtitles and passing me info and webpages about this amazing band.
A great demo for the lovers of darkwave and goth rock.
Enjoy it.
~f*a~r*a~w*a~y*
click me