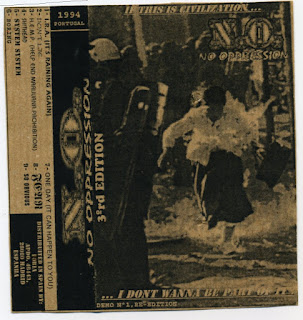 2 singers-female and male-in this portuguese band,they alternate their angry voices in those 9 violent HC Punk tunes in which they sing about politics,drugs,religion and  personal life.

This is their first demo,recorded in January 1994,they recorded a 7inch one year later.
A good demo for  the  @punks.
~f~a~r*a*w~a*y*
click me

Labels: 1994, hc punk, if this is civilization...i don`t want to be part of it, no oppression, portugal, self released