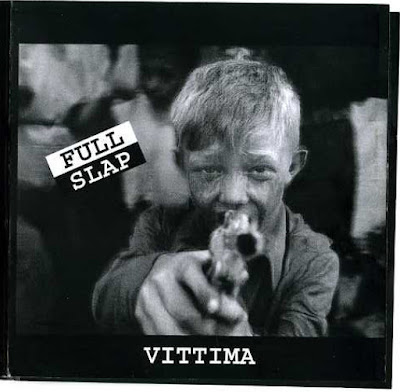 A great cd by this amazing band from Foggia (Southern Italy)!
They were active in the 90s in their hometown`s squats,I talked about them when I posted the AntiRepression Tape split with Brandelli D`Odio.

In this very good cd recorded in a professional studio,Full Slap show us their great ability as  musicians.They mix hc punk,reggae,funky and a bit of jazz with a very personal touch and the lyrics are  very good too.
It was recorded in Bologna in 1995,They splitted up in 1997 and came out in 2007 as a total diy production released by Renzo alone.
Their music reminds me some stuff of the early Red Hot Chili Peppers and Infectious Grooves,also Full Slap is one of the very first band of Renzo Ruggiero who will,later,play with  Follorum Enslamble and Arkitesi.
This is a very good cd for people into creative crossover of various music styles.Enjoy it.
~f~a~r*a*w~a*y*
click me
Posted by faraway at 15:22