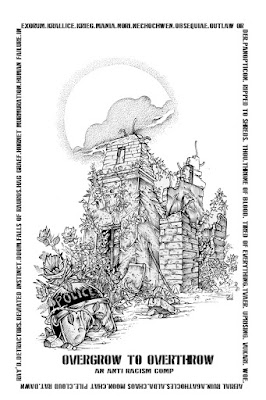 ***FUNDS ARE NOW BEING DISTRIBUTED TO ORGANIZATIONS! Thank you so much for the support.***

THIRTY ONE TRACKS TO COMBAT RACISM.
Voices from across the Metal and Punk spectrum have united to not only speak out against racism and in support of those who are in the streets actively demonstrating, but work to actively support a fight that all of us must take on.

Digital only. All proceeds to support:
• Black Lives Matter - Over-arching movement to combat racism and fight for social justice in the US and Canada.
• Life After Hate - A nonprofit in the US that seeks to combat racism by providing resources to help people leave racist movements, as well as help de-radicalize violent Far Right extremists.

"I am a person of color who lives in Minneapolis and a featured musician on this compilation.
I love this city and its culture, but it would be dishonest not to acknowledge the segregation that still permeates this city. I see it in a geopolitical sense, but also in the hearts and minds of people I speak to here. The death of George Floyd has filled us all with grief; everyone other than those with the most extreme racist beliefs can watch the video and immediately recognize it as a comprehensive moral failing.
With that in mind, I want to emphasize that George Floyd's death is not an anomaly, and that the problem exists on a larger scale than whether four particular Minneapolis police officers are convicted. This same incident plays out at least once a week somewhere in the United States, and it is usually not brought to national attention like this. The outrage is usually less vocal because there is some plausible deniability: the video shakes or wavers for a second and we can't quite see what happened, or the victim yelled something threatening, or the police told the bystanders to stop filming, or sometimes the body cameras are turned off, or sometimes there simply isn't footage at all. But it is happening in our world all the same, and what we all saw transpire on May 25, 2020 is an uncensored vision of the culture we have created.
If I could ask one thing to everyone who would listen, I would say: the next time this happens (and it will happen again), will we allow our friends and colleagues to follow the beaten path of preying on the deniability, steering the conversation toward the deceased's criminal history and asking whether they were on drugs or trespassing or didn't put their hands up fast enough? Will we play that role of devil's advocate ourselves, even while knowing that we are defending an institution of immense power, whose labor union will all but guarantee its officers stay out of jail, keep their jobs and receive back pay regardless of whether they have committed a wrong? Or will we dare to question the status quo, even when the cameras aren't rolling, and lend a voice to our fallen fellow man who no longer has a voice to tell his story?
How we answer this question will shape our communities for generations. If we don't answer correctly, I believe the worst may be yet to come."

The opinions expressed by the individual artists on this comp are the opinions of the individuals comprising those bands, as pertaining to their particular project and in no way represent an over arching narrative that is applicable to every band or Bindrune recordings as a whole, save for this one exception: Every band on this comp, it's organizers and Bindrune recordings stand in opposition and defiance of racism.

Thank you so much for supporting this comp.  click me

Cover Art - Nate Burns
Mastering - Colin Marston, The Thousand Caves
Thank you to all who worked to make this compilation a reality.
Posted by faraway at 09:49