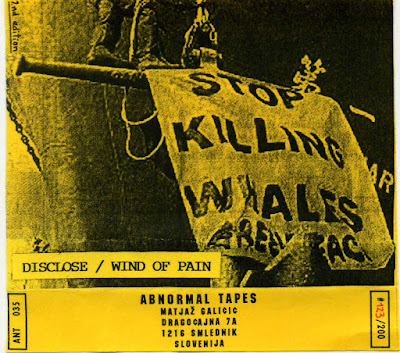 Great split tape with these two D-beat HC punk bands : Disclose was from Japan. Split up after the death of the band's leader Kawakami from an overdose of alcohol and sedative.Wind Of Pain was a crust punk band from Helsinki, Finland. They formed in 1993 and disbanded in 2000.This tape was originally printed in 1998 by the Slovenian tape-label Abnormal Tapes,it was re-printed in 2004 by the same label just before it closed its activities.Abnormal Tapes was, in fact,a Slovenian tape label specially dedicated to Noise, Experimental, Industrial, Punk, Grind & Hardcore styles which was started and run by Matjaz Galicic since 1994 until 2004.