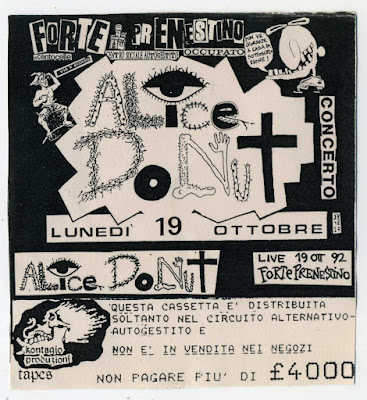 To paraphrase Donny and Marie, this durable New York combo is a little bit Zappa, a little bit cacophonous punk. That combination makes its quirkcore expeditions either grin-inducing or grating, depending on one’s ability to stomach the unique vocal style of frontman Tomas Antona, whose high-pitched screech falls somewhere between Perry Farrell and Sparks frontman Russell Mael on the weed-o-meter. While it took the quintet a while to find its footing — the first two albums are little more than extended, grad-school fortified fart jokes — Alice Donut did develop a knack for sniggeringly malevolent tweaking of mainstream and underground mores alike. (from Trouse Press)

Alice Donut`s official webpage is here.
Kontagio Produzioni Tapes was a small distro releasing mostly live tapes recorded in this massive squat(probably the biggest in Europe).
Forte Prenestino is, in fact, a fort squatted on the end of the 80s and still alive and kicking.
Enjoy it.
:f*a_r^a~w)a_y:
click me
Posted by faraway at 09:05